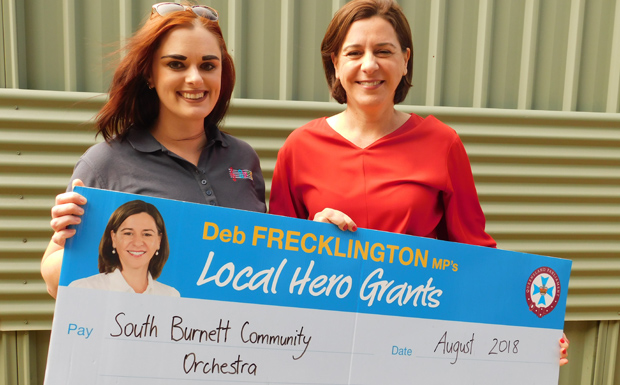 Member for Nanango Deb Frecklington has thrown her support behind the South Burnett Community Orchestra following a recent break-in which resulted in the theft of some of their musical equipment.

About five weeks ago, thieves broke into a locked storage area the orchestra rents from the Uniting Church in Kingaroy.

Two electric pianos, a piano speaker, two brand new foldback speakers and a number of cords and cables were stolen.

The total value of the items stolen was more than $4000.

Mrs Frecklington said the loss of equipment has had a significant impact on the group.

“I was really disappointed to hear about the break-in and that so much equipment had been stolen,” Mrs Frecklington said.

“The Orchestra has been working hard for their Armistice Centenary Commemoration Gala Charity Dinner Concert on November 10 and without some of this equipment, it has been a real setback.”

“I wanted to show my support and make a donation to help them kick off a fundraising effort to get back on their feet,” she said.

The SBCO has also organised a “beat the thief” fundraiser at their Christmas At Cassis event on December 15.

“We have so many events planned for the next few months, but we are working hard to try and make sure this equipment loss doesn’t have any affect the quality of our performances,” Jane
said.

“It’s made us more determined than ever and our ‘beat the thief’ event is a way of showing our determination to carry on.”