Stags Do It Again In Style

Nanango has nothing left to prove this season – except hoisting the Grand Final trophy – after stamping their dominance over the Kingaroy Red Ants in their home game at Kassulke Oval at the weekend.

The Stags have been looking bigger, faster, fitter and better-drilled than any other senior team in the 2018 South Burnett rugby league competition, and they demonstrated this again last Saturday with their 54-12 demolition of Kingaroy.

While the courageous Wondai Wolves languish at the bottom of the table, and the Stags romp away in top spot, it’s been left to the “middle teams”, ie. Cherbourg, Murgon and Kingaroy, to put on the close games that spectators enjoy the most.

Nanango dominated the first half on Saturday against the Red Ants, going into the break leading 34-0.

It was only in the last 15-20 minutes of the game that they let their defences lapse slightly, letting in two Kingaroy tries.

In the earlier game played at Nanango, the U18s South Burnett Eagles had a good win over Gatton, defeating the visitors 26-6.

There are no junior or senior games scheduled to be played in the South Burnett this weekend because of the school holidays and carnival commitments.

A Burnett U20s team will be in action during the 47th Battalion carnival in Gladstone (see below). All TRL U18s teams have a bye this weekend.

Junior teams from Murgon and Nanango will be in action at a mini-mod carnival in Hervey Bay.

Kingaroy Red Ants and the Murgon Mustangs are co-hosting the Zone 5 Under 35kg carnival all next week at T.J. O’Neill Oval in Kingaroy (see below).

The huge Zone 5 Under 35kg carnival will be held in Kingaroy next week, with more than 100 young players expected to camp at the Kingaroy Showgrounds.

The official weigh-in will be held at TJ O’Neill Oval on Sunday followed by an athletics carnival.

The rugby league carnival will be kicking off in earnest on Monday.

On Friday, the best three players from each team will be selected to play in an East v West game. 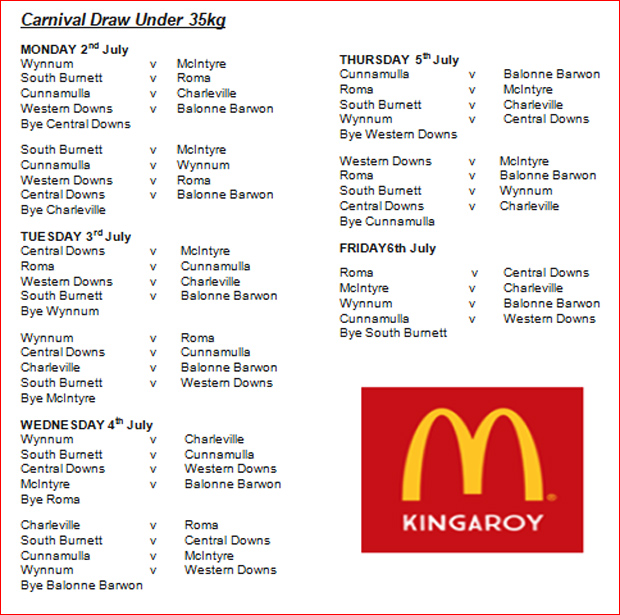 During the interview, Greg predicts that at some stage in the future, more South Burnett teams could play in the Toowoomba Rugby League:

South Burnett U18s amd U20s teams will be playing in the 47th Battalion carnival in Gladstone this weekend.