Ag Minister Drops In For A Chat 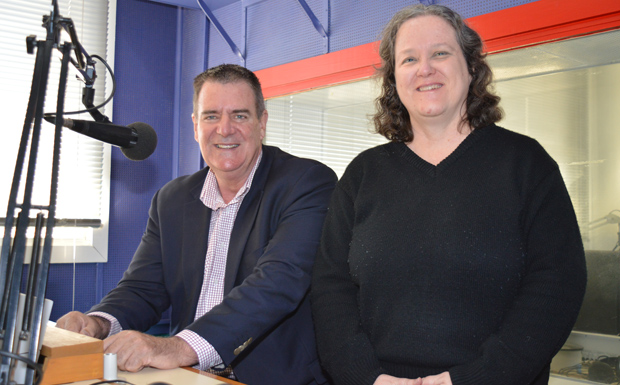 Agricultural Industry Development Minister Mark Furner dropped into Kingaroy briefly on Wednesday to chat on the radio about the new Agricultural Ministerial Advisory Council (AgMAC), the future of the historic Jimna Fire Tower and the creation of a $10m export hub.

These two men will become permanent members of the council, which will be chaired by the Director-General of the Department of Agriculture and Fisheries, Dr Beth Woods.

However, Mr Furner said this would not prevent representatives from other organisations such as Growcom or QDO from taking part if issues arose in particular industries.

Other Ministers would also be invited in when issues touched their portfolios.

Mr Furner said the aim was to keep AgMAC as “sincere, down-to-earth” meetings which could generate solutions to issues.

“The number of stakeholders in agriculture is many but the last thing you want is a talkfest around a table where nothing is getting done,” he said.

AgMAC will meet for the first time next month.

Items that Mr Furner expects to be on the agenda first-up are power and water.

Mr Furner said $1 million had been allocated in the State Budget for the restoration of the historic Jimna Fire Tower.

He said the group which had been active around the fire tower for 10 years was calling on his department to hand it over to the Environment and Heritage Department to make sure its value was recognised.

“At this stage we are exploring the options of how that will be determined, whether it be a tower that’s placed on the ground or other measures is yet to be assessed in respect to that commitment of $1 million towards it,” he said.

Mr Furner said he was really excited about plans for a new $10 million export distribution centre in Queensland.

Regional communities have been invited to register expressions of interest to host the centre before June 29.

“There are a lot of locations that would like to see the $10 million export hub established in their backyard,” Mr Furner said.

“We will look at those expressions of interest when they come in.”

He said the export hub would provide opportunities for international engagement with Queensland produce.

If Queensland could tap into niche markets overseas, in the future there could be two or more international trade export hubs established in the State to grow the agricultural industry.

Mr Furner said that if Wellcamp Airport put in an expression of interest, the government would “definitely be considering that”.

“I think that’s a typical example of what we’re looking for,” he said.