Mitch Takes On Best In The World 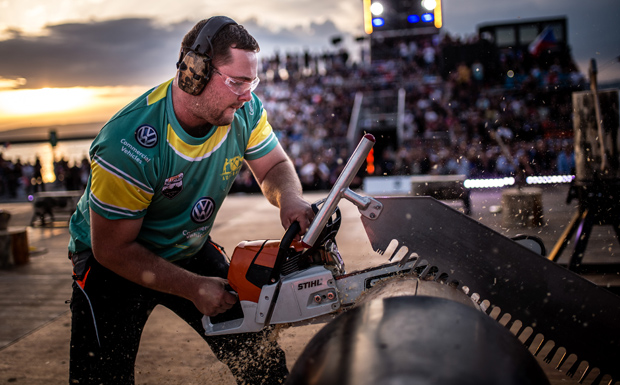 Mitch Argent, from Blackbutt, cuts off a “cookie” in the Stock Saw category in Marseilles

Blackbutt axeman – and Aussie champion – Mitch Argent came third against the world’s best in the prestigious Stihl Timbersports Champions Trophy held in France at the weekend.

Mitch, 24, was the youngest competitor in the international event and set the fastest time of the competition on his way to the finals.

He competed against 12 elite athletes from all over the world in front of thousands of fans at Marseilles.

After finishing fourth in the time trial, Mitch took on Polish competitor Michael Dubicki in the quarter-final, finishing in 58.12, just .30 seconds off the world record and setting a new personal best time.

Mitch then came up against last year’s runner-up, Stirling Hart, from Canada, in the semi-final.

After a thrilling rollercoaster where the competitors swapped the lead, Mitch clawed back a 4 hit defective on the final discipline to finish just one hit and 0.8 seconds short.

After this, he took on Martin Komerak, from the Czech Republic, in the 3rd place play-off.

Mitch showed grit to beat Europe’s most dominant competitor for the past 10 years to seal the third spot.

Stirling Hart went on to win the Grand Final with a time of 1:03.40 against nine-time world champion, Jason Wynyard, from New Zealand.

“I did my best and am happy with today’s result,” Mitch said after the event.

“It’s been a huge couple of months and I’m keen to come back next year, better and stronger.

“I wasn’t able to get the win this time but I’m glad I had the chance to come out here and compete against these guys, and hopefully take my skills to the next level.”

Competitors have to compete in four disciplines back-to-back in the quickest time to win the Stihl Timbersports Champions Trophy.

Joining Mitch in France was Tasmanian Daniel Gurr, 21, who brought home the Rookie Champions Trophy against eight of the best young woodchoppers from around the world.

Almost the GREATEST COMEBACK of all time!!! Watch as Aussie Mitch Argent comes from 6 hits behind to Stirling Hart (CAN) in the last discipline to come within a whisker of the Final!

Posted by STIHL Timbersports on Wednesday, 30 May 2018 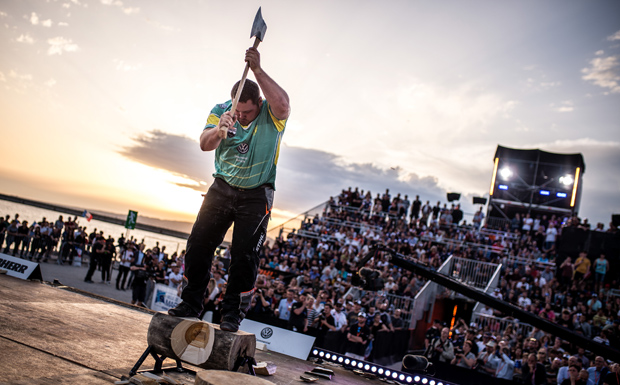 Mitch Argent in the Underhand Chop, one of the four Stihl Timbersports disciplines decided during the Champions Trophy competition at Marseilles 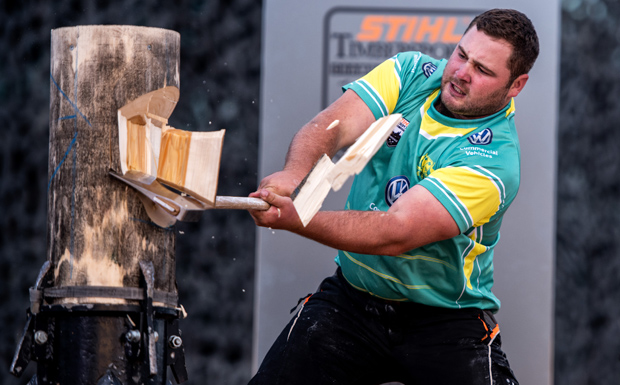 Mitch takes a massive swing in the Standing Block Chop

Saw – Stock Saw
Athletes use the Stihl MS 661 C-M Magnum Chainsaw. They must cut one disc, called a cookie, from a 40cm diameter log, within a 10cm mark. Top competitors can cut one downward and one upward cut in less than 10 seconds.

Axe – Underhand Chop
In the past, the underhand chop technique was used to cut a felled tree down to size. Standing on a horizontal log, the athletes cut with an axe through a 30cm log. The log has to be worked from both sides. Top athletes will aim for 10-12 hits in the front and then 10 or less in the back in a time of 12-20 seconds

Saw – Single Buck
The single buck is a massive 2 metre long one-man saw. With this, the athletes cut off a complete disc from a 40cm log. The perfect mix of rhythm and strength are key to success. All competition single buck saws are hand filled, and cost in the region of $2000-$4000 depending on the filler. Saws will last approximately 10 competitive runs before they will need to be re-sharpened.

Axe – Standing Block Chop
For the standing block, the felling of a tree with an axe is simulated. A vertical log with a diameter of 27cm has to be cut through from both sides. This discipline calls for both power and precision. Top athletes will aim for 8-10 hits in the front and then eight or less in the back in a time of 12-20 seconds.