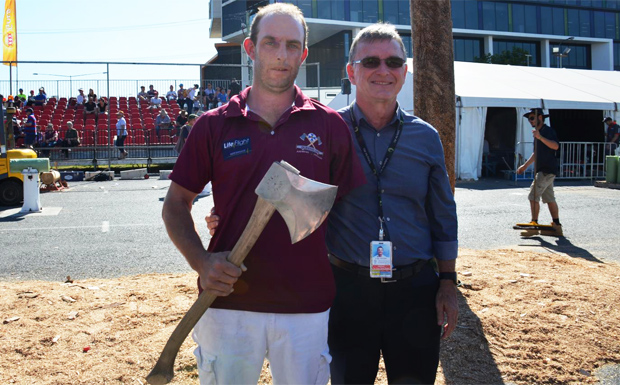 One-armed axeman Nick Fredriksen with the doctor who treated him after his childhood accident,
Dr Colin Myers ... Nick will be chopping at Maidenwell at the weekend (Photo: RACQ LifeFlight)

A special attraction at this weekend’s Maidenwell Woodchop will be Australia’s only competitive one-armed woodchopper, Nick Fredriksen.

The weekend is raising funds for the RACQ LifeFlight Helicopter Rescue service, which is fitting as Nick has had to call upon their services twice.

The first time was more than 20 years ago, when eight-year-old Nick got his shirt was caught in a hay baler which resulted in the amputation of his left arm.

He’s since gone on to achieve international fame and success, recently travelling to the United Kingdom to compete in the Royal Welsh Show after videos of his one-armed woodchopping achievements went viral.

Nick needed a second aeromedical lift in 2003 after he had another accident, crashing through glass louvres.

As each airlift costs around $12,000, he has set himself a personal fundraising target of $24,000 for LifeFlight.

Nick said he’s proud to be competing at the Maidenwell Woodchop because it’s supporting such a worthwhile cause.

“It’s so important to me to give back to aeromedical services, like LifeFlight, because I’ve needed the service twice myself and I know how much of a difference they make,” he said.

The 2017 Maidenwell Woodchop will run across Saturday and Sunday and will feature post-ripping as well as woodchopping.

An RACQ LifeFlight Rescue charity dinner will be held on Saturday night.

The event is being organised by the Maidenwell Community Group, which hopes to raise more than $10,000 for the LifeFlight Foundation.