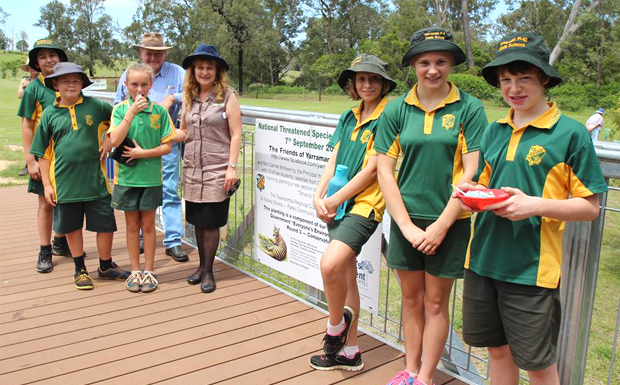 The Friends Of Yarraman Creek (FOYC) have won the Waterway Stewardship category of this year’s Healthy Waterways Awards.

The 2016 winners were announced at a Gala Dinner held at Brisbane’s Hilton Hotel on Friday, July 8.

The Healthy Waterways Awards have been running since 2000.

They recognise the dedication of volunteers, schools, community groups and organisations who are working to the protect and improve South East Queensland’s waterways.

This year there were 11 Award categories, along with a Minister’s Grand Prize which was judged by an independent panel of experts.

There was also a People’s Choice Award, where the winner was determined by popular vote from amongst the finalists.

The FOYC won the Waterway Stewardship Award for restoring the formerly weed infested Yarraman Creek to a healthy state, creating a beautiful habitat for the town’s flora and fauna.

The group have been working to restore the strip of creek that borders Errol Munt Park for more than four years.

They also held 11 field days to showcase the newly restored creek to more than 200 visitors, as well as raise awareness about the importance of protecting it.

FOYC spokesperson Susan Reilly said the group were “over the moon” about the win, which has provided official State recognition of the project.

“It’s really an award for all our members, who volunteer their time every week to continue caring for this waterway and working to restore it to much the same condition it was in when Yarraman was first settled,” she said.

Ms Reilly also paid tribute to Toowoomba Regional Council – and in particular, Cr Anne Glasheen – for the help they’d provided to the project.

“Cr Glasheen has been a constant source of support for what our group has been doing, and I hope our Healthy Waterways Award reflects well on her, too,” Mrs Reilly said.

More information about this year’s Award winners can be found on the Healthy Waterways website.