I have a love/hate relationship with milk.

I love to use it in cooking. But personally, I hate the bloated feeling I get after drinking it.

So I’ve now turned to soy milk and almond milk, which seems better (for me anyway).

And I also drink my coffee black as a straight shot of espresso.

As a chef I would be lost without milk, though, because it’s an essential ingredient in many of my favourite recipes.

However for some time I’ve been questioning whether humans should be consuming something that is really meant for calves, baby goats and lambs.

In fact, humans are the only species on Earth that consume milk past infancy.

Maybe we are not really supposed to be drinking it into adulthood?

But on the flip side, I don’t think I could live without some of my favourite cheeses, which don’t seem to have any effect on me.

So, while I battle with my own hypocrisies, here are some facts about milk: 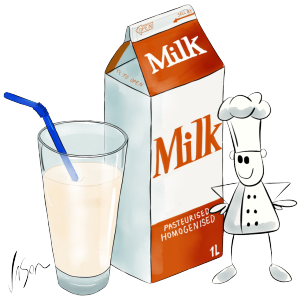