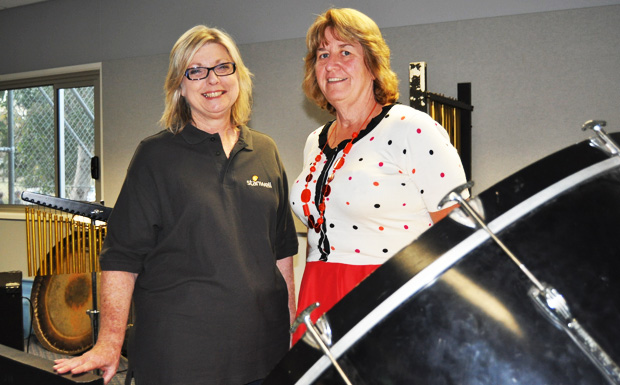 Stage 1 of the long-discussed South Burnett Performing Arts Centre in Kingaroy has hosted its first public function to great acclaim … which means fund-raising for the all-important Stage 2 of the project can now begin in earnest.

The centre is located in the grounds of the Kingaroy State High School but is not solely for school use.

On Wednesday, Stanwell Corporation held its community stakeholder consultation meeting in the building.

Students began using the rooms recently, but this is the first time an outside group has used the space. And everyone seemed very impressed!

The idea of a Performing Arts Centre – which could hold major entertainment events as well as double as a conference centre – has travelled a rocky road to fruition … and it’s still only halfway there.

An earlier proposal that a centre be built at Kingaroy Showground faltered in 2008 after the South Burnett National Show Society withdrew from the project citing financial constraints.

Controversy also surrounded a suggestion at that time that the centre include an interpretative area for tourists looking for information about former Queensland Premier Sir Joh Bjelke-Petersen.

These earlier suggestions were replaced by the concept of a joint school/public use facility to be built in the grounds of the high school.

The school sought support from Council last year in regards to site preparation and earthworks for Stage 1 of the project. This was granted and work quickly began on construction.

P&C President Debbie Jackson said the project started more than 10 years ago with a dream for a facility which both the school and the wider community could use.

“Tarong (now Stanwell) has been a partner with us from the beginning,” she said.

As the project dragged on, it became apparent that the study would have to be updated. Stanwell kicked in another $5000 and the South Burnett Regional Council put in $35,000 to allow this to take place.

Funding has come from a range of sources, including $512,000 from the Smart School Subsidy Scheme and $480,000 from P&C fundraising.  South Burnett Regional Council contributed $42,500 for earthworks.

As the opening deadline approached, Stanwell came to the rescue with another $35,000 to assist with the fitout.

Stage 2 – at an estimated cost of $6 million – will consist of a 500-seat auditorium and cafe and will be built next to Stage 1.

This industry-standard multi-purpose facility would be able to host stage performances, exhibitions, conferences and functions.

Because the buildings are located on school land, all maintenance and running costs will be covered by Education Queensland.

However, on-going corporate and community support is required to make Stage 2 a reality.

The KSHS P&C Association can issue a tax-deductible receipt for all donations over $2, with cheques made out to the “Parents’ & Citizens’ Building Fund”.