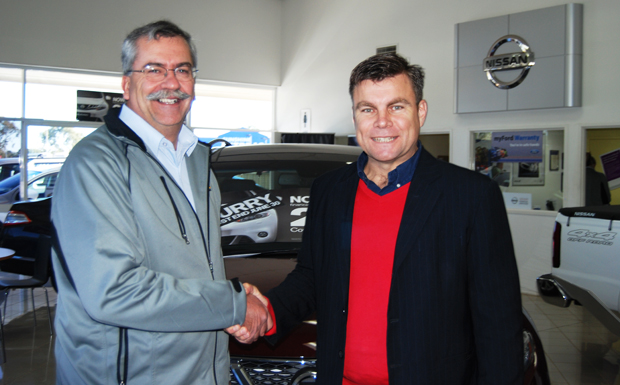 The South Burnett received a rare honour this week: it’s now home to one of the top Nissan dealerships in Australia.

Nissan State Manager Jeff Bennett visited Kingaroy on Wednesday to formally present Huston Nissan with a Platinum Dealership Award for being one of the leading Nissan dealers in the country.

The Award is so difficult to achieve that there are only four Platinum Dealerships between northern NSW and Cape York.

“In order to be awarded Platinum status a dealer has to not only meet all our top-level evaluation criteria but also exceed them,” Mr Bennett said.

“We assess every aspect of the business from marketing and promotion through to after-sales service and customer care. And Huston’s not only met all our benchmarks, but exceeded them.

“In fact, they gave 105 per cent on every single thing we tested them on. So I’m very pleased to welcome them into this very select club.”

Huston Nissan CEO Mark Huston said he was genuinely delighted to receive Platinum Dealership status but added the Award was a team effort so he was very pleased to be able to share the honour with all his staff.

“We’ve had a 16-year association with Nissan and we’ve all put a lot of effort into this. So this is something I think everyone is really proud of.”

The firm began operations as a Ford dealership in Wondai in 1935 then moved to larger premises in Murgon in 1979, where they still operate today.

In 1989 they opened an outlet in Kingaroy, then purchased Kingaroy’s Nissan dealership seven years later. They relocated from the heart of town to their present premises on the D’Aguilar Highway where they continue to sell and service the full range of Ford, Nissan and Suzuki cars.

But why would a car dealership with more than half a century of in-depth experience with Fords take up a Nissan dealership as well?

“Nissan produce brilliant vehicles which allow us to offer our customers a wider range than we could if we only offered a single brand,” Mark Huston said.

“We take as much pride in Fords as we ever did, they’re one of Australia’s leading brands, and for good reason.

“But Nissan offer different approaches, models and options that suit some of our customers better.

“And – in the end – we think our job is to put people into reliable cars they’re happy with at prices they’re comfortable with, then look after them through the whole car lifecycle. So our biggest motivation was to be able to look after our customers better.”