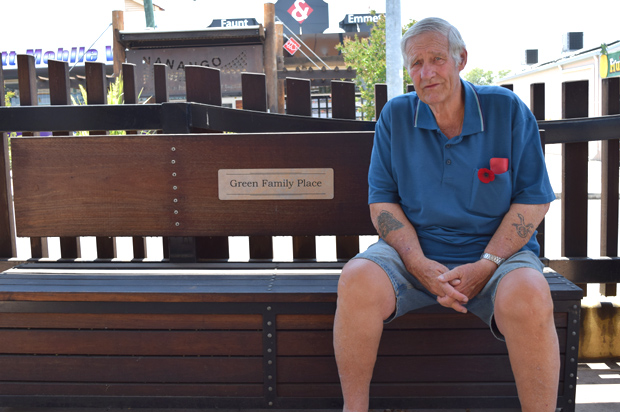 Former councillor Barry Green was wryly amused to discover his family has been honoured with a plaque on Nanango’s Drayton Street … the plaque came after six months of Council deliberations, followed by a further six months delay while the Council created and mounted the sign

A small plaque attached to a bench in Drayton Street, Nanango has marked the end of one of the South Burnett Regional Council’s most extraordinary infrastructure naming decisions.

The plaque – which simply says “Green Family Place” – recognises the contribution of one of the town’s pioneering families to the local community over the course of more than a century.

But the decision to affix the plaque saw councillors ponder the matter for more than six months, as well as put out a call for public input that unearthed no objections.

And when it was finally unveiled, the first the Green family knew of it was when a family member walked past the bench and saw the new sign.

The idea of naming one of the Drayton Street shelters after the family was suggested to the Council by former Mayor Wayne Kratzmann.

Mr Kratzmann suggested the shelter should be named “Barry and Mary Green Place” to recognise the contributions the well-known couple have made to the Nanango community over the course of their lives.

The proposal was discussed at the Council’s September 2018 meeting where councillors were told no similar name was in use anywhere in the South Burnett and the proposal conformed with Council’s Infrastructure Asset Naming Policy.

However, Mayor Keith Campbell said Nanango’s streetscape was a community asset and Council had no prior experience renaming parts of a streetscape, so he thought public consultation was the correct way to approach the issue.

The question then lay on the table for six months until the February 2019 meeting, where councillors were told public consultations had unearthed no objections and voted unanimously to adopt the proposal.

During the interval, however, Barry and Mary Green made it known that if the Drayton Street feature was to be renamed at all, they preferred it be renamed to recognise the Green family rather than themselves.

Last week, former Councillor Barry Green – who served two terms on Nanango Shire Council and another two terms on the South Burnett Regional Council – said he was surprised at how the decision was arrived at.

Nor had any been undertaken when Byee farmers wanted to name a bridge over Barambah Creek after Deputy Mayor Kathy Duff.

“Still, I’m glad we can finally rule a line under this and get on with other things,” he said.