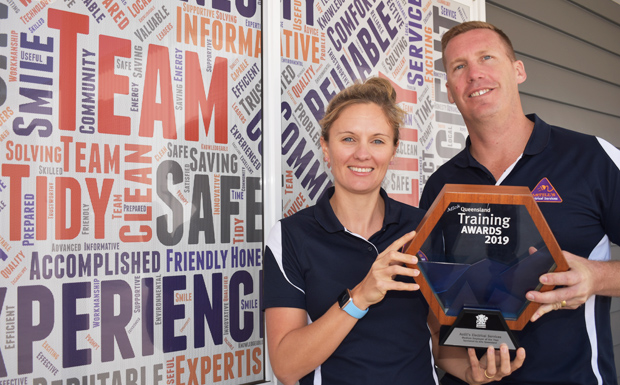 Amanda and Mick Astill, from Astill’s Electrical, with their State award … they are waiting to find out whether they will be judged in the national awards

Astill’s Electrical Services has celebrated its 10th birthday by taking out the Queensland Medium Employer of the Year trophy at the Queensland Training Awards in Brisbane.

Owners Mick and Amanda Astill were congratulated and presented with their State trophy by Training and Skills Development Minister Shannon Fentiman at the Brisbane Convention Centre on Saturday night.

They qualified for the State competition after being successful at a regional level in the Darling Downs South West awards in July.

Astill’s began 10 years ago next month in a garage in Wondai.

It’s growth has been steady over the years and it now boasts modern, new premises in Kingaroy plus a branch on the Sunshine Coast.

When southburnett.com.au spoke to Astill’s after their regional win in July, they had 26 employees across the two sites.

But the business continues to grow: Astill’s now has 28 workers, including seven apprentices and one trainee.

Amanda said winning the State award was unexpected but Mick was more confident.

In 2018, Mick and Amanda took home the Darling Downs South West Small Employer of the Year award and were finalists in the State awards. 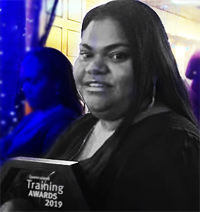 Phyllicia Landers, from Cherbourg, was a finalist on Saturday night in the Equity VET Student of the Year State award.

She won the regional award in July.

Phyllicia started as a hospitality trainee under the State Government’s Skilling Queenslanders For Work program in 2016 and completed a Certificate II in Hospitality.

In October 2017, she began work at the Cherbourg Community Cafe and Training Centre.

She presented awards to winners across 14 categories.

Three of these winners will be selected after further judging to represent Queensland at the national Australian Training Awards, being hosted in Brisbane on November 21.