Kevin Shares A Message Of Hope 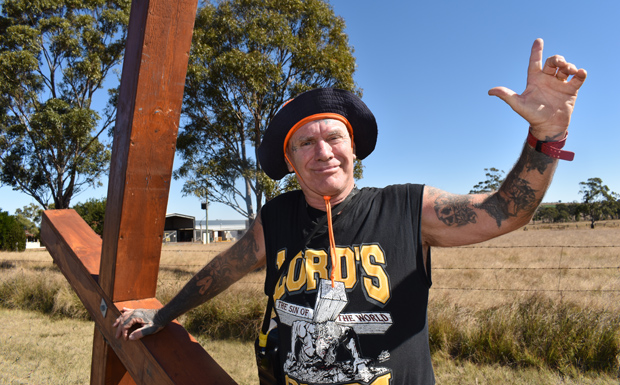 If you’re out and about in Kingaroy or Nanango over the next few days, keep an eye out for pedestrian Kevin Mudford … you can’t miss him, he’s hauling a huge wooden cross behind him!

Kevin, 63, freely admits that he used to be one of New Zealand’s “worst jailbirds”.

“I spent most of the 1970s behind bars,” he told southburnett.com.au on Wednesday, as he paused for a moment on the side of the Bunya Highway.

His tale is a familiar one: a broken home, boys’ homes, drugs, alcohol, violence … followed by stints in prison and hospitals.

“In 1978, I became a professional mental health patient,” he joked.

But his recovery from all this is no joke …

He had been in and out of 30 hospitals when he saw his brother become sober in 1978 in a self-help group and become a re-born Christian.

That’s when he picked up his cross in Hastings in New Zealand and started to carry the message to other alcoholics and drug addicts.

He’s been at it ever since (although he’s had to make a few new crosses over the years as the old ones wore out …).

Kevin will be 38 years clean and sober in November this year.

He plays Gospel music to keep him company as he trudges the road, carrying a message of hope and recovery to everyone he meets.

These days he has no home … just a caravan which he takes from town to town.

He has travelled thousands of kilometres over the years, right across Australia from WA to Tasmania, the Kimberleys to Torres Strait.

Kevin has been invited to share his story at the Wesley Methodist Church in Cairns Street, Nanango, at 10:00am on Sunday.