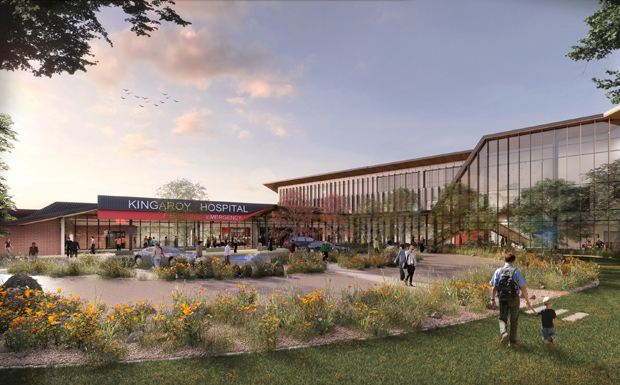 A ground-level view of what the new Kingaroy Hospital will look like when built … MP Deb Frecklington has queried why the State Government has so far only spent $10.5 million on the project, when it budgeted a $28 million spend by June 30 this year (Photo: Conrad Gargett)

Member for Nanango Deb Frecklington has asked why spending on Kingaroy Hospital’s upgrade is running 53 per cent under budget.

“I am calling on Health Minister Steven Miles to explain why we have such a huge underspend, and whether the project will be delivered on time.”

Mrs Frecklington said she had asked three Questions on Notice to the Minister about the project and completion dates since February 2018.

“The Minister has never provided an opening date, instead only providing a vague expected timing of sometime in 2021,” she said.

“We all know about Labor’s horrible record of budget blowouts on major projects, particularly health projects.

“Our community simply cannot be expected to endure any more time waiting for this new hospital.”

Mrs Frecklington said she had been fighting for the upgrade for six years and was determined to hold the government to account on the redevelopment of Kingaroy Hospital.

“We all expect to see works fully underway as soon as possible following this long period of inactivity,” Mrs Frecklington said.

An extract from last year’s State Budget papers, which forecast that $28 million would be spent on Kingaroy Hospital’s redevelopment by June 30, 2019