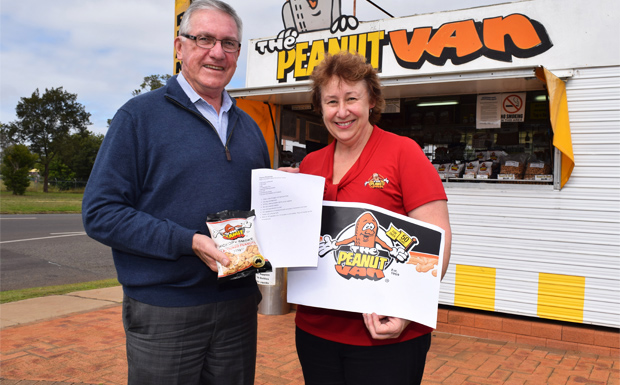 The Peanut Van is celebrating its 50th anniversary in 2019, and manager Rowena Dionysius said the cookbook is one of several projects the business is planning to mark the occasion.

Rowena is collecting recipes from well-known South Burnett residents and visiting celebrities, and already has 10 on file.

The plan is for the book to start with several recipes from The Peanut Van’s owners Rob and Chris Patch, followed by treats from other cooks.

Each recipe will be accompanied by a photo of the person who contributed it.

Opposition Leader and Member for Nanango Deb Frecklington has already been lined up to submit a recipe of her own next month.

Deb is also a deft hand in the kitchen and has won awards for everything from chocolate cake to pesto at shows, including the Ekka.

Mayor Campbell said his peanut brownies recipe was very simple to make, so he hoped it would appeal to anyone who wasn’t confident in the kitchen.

“I know cooking can be hard, so this recipe is especially suitable for men and boys who don’t know a lot about cooking,” he said.

The Mayor said The Peanut Van was an iconic local landmark, and he was particularly fond of their Hickory Smoked peanuts.

“Everyone knows you can’t visit Kingaroy without dropping by The Peanut Van,” he said.

“And to think it’s been around for 50 years now, that just goes to show what a great community like ours can do.”

Rowena said she has seen old pictures of The Peanut Van parked in various places around the town, and was sure it started out as a mobile business.

However, she was just as sure it has been parked in its position at the corner of Kingaroy and Baron streets for most of the past half century.

Naturally, she hopes it will celebrating its centenary another 50 years from now.

Note: The brownies will harden as they cool