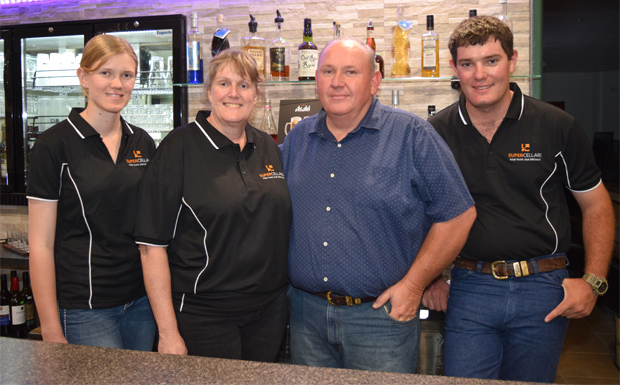 Emily, Sue, Jason and Geoff Kinsella at the Club Hotel’s new Craft Bar … the hotel will be focussing on Australian craft beers and wines to bring something new to the region’s hotel offerings

Kingaroy’s historic Club Hotel intends to carve out a new niche in the region’s hotel landscape.

Owner Jason Kinsella – who is already well-known for Moffatdale Ridge Winery – says he wants to bring back “a real pub atmosphere” where people can stop by for a drink and chat with their mates without the noise of gaming machines in the background.

So he’s eliminated poker machines, keno and TAB and intends to keep the hotel gambling-free.

Instead, patrons can enjoy an ever-changing selection of craft beers on tap, or browse through the region’s largest selection of wines in the hotel’s bottle shop.

They’ll also be able to snack on tapas platters if they feel peckish.

Jason told a recent Kingaroy Chamber of Commerce Meet & Greet that he had been kept busy renovating the hotel for most of this year, and still had more to do.

This includes expanding the size of the hotel’s upstairs bedrooms, renovating the upstairs conference room and building an indoor beer garden.

However, he opened the hotel’s doors in late August after the building was shut up for more than a year.

The new-look pub has now been successfully trading for several weeks and Jason said he was very pleased with the positive reactions he has received so far.

The hotel will focus on craft beers and ciders from Australia’s booming independent breweries.

Jason said he plans to change the beers on the bar’s taps regularly to reflect the season.

The bottle shop will provide wine buyers with a choice of 600 labels, including the full range of Jason’s award-winning Moffatdale Ridge wines.

He said the hotel would be run as a family-owned enterprise the same as his winery, with sons Geoff and Josh helping out alongside daughter Emily and his wife Sue.

“Geoff wants to work in the vineyards so I think Josh will be handling the hotel’s day-to-day operations, and I’ll be handling Josh,” Jason joked.

“But we’ve all had a lot of experience working together and we all enjoy looking after our customers, so I think it should work out fine.”