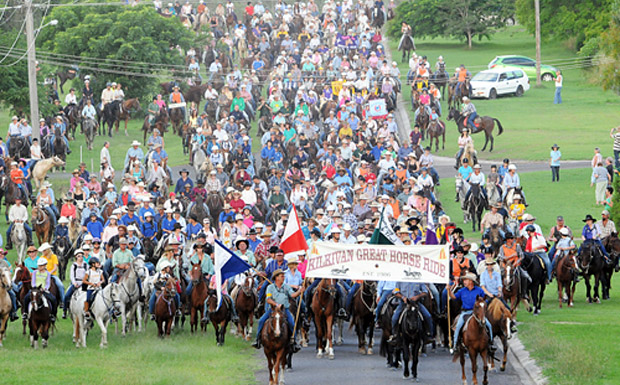 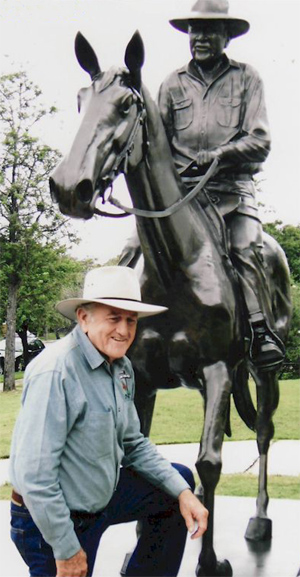 Flashback: Kilkivan Great Horse Ride founder Fabian Webb next to a scuplture of him in Kilkivan created by metal artist Dan Davie

This weekend’s Kilkivan Great Horse Ride is being dedicated to Fabian Webb who died in November last year.

The popular country music singer and cattle man served on Kilkivan Shire Council from 1967 to 2004 and was instrumental in founding the Great Horse Ride as well as what later became the Gympie Music Muster.

The “Fabian Webb Memorial Ride” will also mark the 30th anniversary of this iconic equestrian event.

There will be three trails operating on Saturday (April 11) again this year:

At 4:00pm, all the riders will converge on Kilkivan for the Grand Parade down the main street.

But the weekend isn’t just about horses …

Friday night kicked off with live entertainment by the Hillbilly Goats at “Thornside”.

On Saturday night, the Tom Grady Campfire Concert will take over the Kilkivan Showgrounds. Entry to the cost is $20 for adults, $5 for teenagers (12-17) and under 12s free.

And then on Sunday, there will be “Fun Church Goats” on Sunday morning, followed by a Pony Club fun day, run by the Kilkivan Pony Club. There will be junior and senior events with nominations taken on the day.