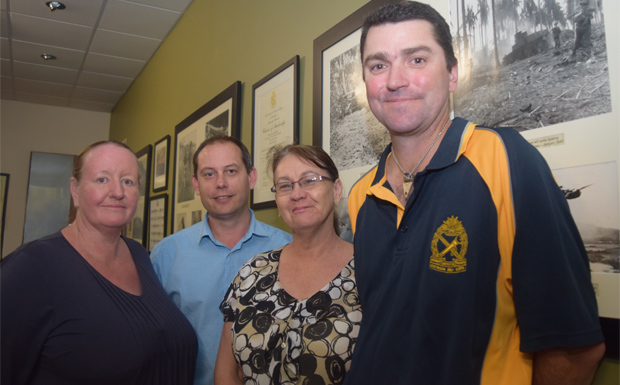 A lack of suitably qualified volunteers means there will be no Australian Army Cadet Unit based at Wondai in 2015.

The sad news was broken to cadets, parents and RSL Sub-Branch members at a packed meeting held in the Anzac Room at the Kingaroy RSL Club on Tuesday night.

Instead, the cadets – who come from Kumbia, Kingaroy, Wondai, Murgon and the Central Burnett – will be offered the opportunity to join the 177 Australian Cadet Unit that meets at Nanango State High School.

The meeting, chaired by Lieutenent-Colonel (AAC) Leigh Eagle from Brisbane, was told 135 ACU at Wondai had 35 cadets at present, although five were expected to leave next year; 177 ACU at Nanango has 23 members but this is expected to drop to 20 next year.

However, despite having more cadets on the books, and a better parade facility, the Wondai unit cannot continue.

Current officer-in-charge Captain (AAC) Peter Schneidewin has relocated to Toowoomba and no replacement has stepped forward.

Captain (AAC) Liane Kerr, who runs the Nanango unit, cannot take over Wondai because she lives too far away.

And even if a volunteer agreed right now to take on the role, there would be a minimum of 12 months training required before they could slot into the position.

Suggestions the two units combine and relocate to Kingaroy were discussed, but Lt-Col Eagle said to get a new base started from scratch could take at least 18 months.

“The reality is Wondai is not going to kick off in the New Year. November 29 will be the last training day until further notice,” she said.

Lt-Col Eagle said after discussions, a proposal had been developed for the Nanango unit to be expanded by 30 places, with these offered to the former Wondai cadets. The cadets would transfer across and keep their rank.

Capt Kerr had agreed to this, she said, so long as more volunteers also stepped forward to help her at Nanango.

The facility at Nanango State High School would also have to be expanded.

Lt-Col Eagle said she would put forward a submission recommending the Wondai unit be “put on hold” on for 12 months, providing the hope that the unit could be restarted if someone who was AAC command-qualified became available.

UPDATE October 30:  Emergency Meeting To Discuss How To Save Cadet Unit