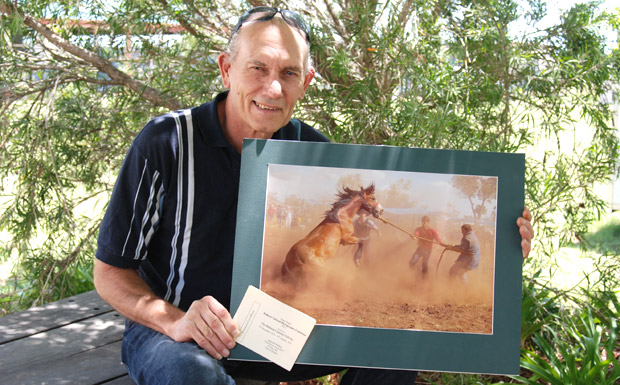 Well-known South Burnett photographer Max Walters has won a national award for a photograph he took of horse breakers at the Bell Show.

He was told this week his photo had taken first prize in the Social Documentary section of the prestigious Ballarat National, an annual photographic competition which draws more than 1000 entries from the nation’s leading photographers each year.

This year’s National is the 42nd, and all the winning entries will go on display at the Art Gallery of Ballarat from December 9 to January 20.

The competition covers seven categories – Creative/Experimental, Landscape, Nature, Open Colour, Open Monochrome, Portraiture and Social Documentary – and a maximum of 49 out of the 1000 entries are selected for awards.

Max also received Acceptances for three other photos he submitted to this year’s National, which acknowledge that his work is equal to the best in each category he submitted to.

It’s the first time Max has won a national award for a print, but it’s not his first national award – he’s also won four others over the years for slides.

Max has been actively interested in photography ever since the 1980s when he first joined the Murgon Camera Club “for a spare time interest”.

He says he only began to take it seriously in the late 1990s when his work began winning State and National awards, including the South-East Queensland Champion A-Grade Slide Award in 1999 and 2000.

He has been vice-president of the Photographic Society of Queensland (PSQ); president of the Murgon Camera Club; acted as an organiser for the PSQ’s annual conventions and is a regular judge at PSQ appraisals. He also lectures and judges for photographic clubs throughout south-east Queensland.

His work has been exhibited at the Wondai Shire Regional Art Gallery, the Kingaroy Shire Art Gallery nd at Photo Continental’s PSQ exhibition space in Brisbane.

Max moved from Murgon to Kingaroy three years ago but is still active with the Murgon camera club.

Over the past few years he’s also moved away from slides into digital photography.

However, he still uses film for particular assignments, such as low-light photography and monochrome studies, because he believes it offers some advantages digital photography has yet to equal.

So how did he decide to shoot “Wild Horse Event – Bell”?

“I didn’t,” Max shrugs. “Or that is to say, I didn’t consciously decide to go out and photograph horses at the Bell Show that day.

“There are just some days when your camera decides to take you somewhere and wants to point itself at something.

“As a photographer, you just have to do what it tells you.” 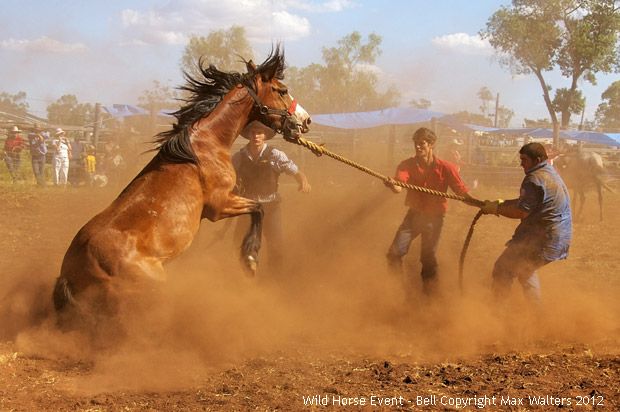 The South Burnett photo that will go on show at the Art Gallery Of Ballarat and into the Ballarat National's history books next month: 'Wild Horse Event - Bell'

One Response to Max Snaps Up National Award