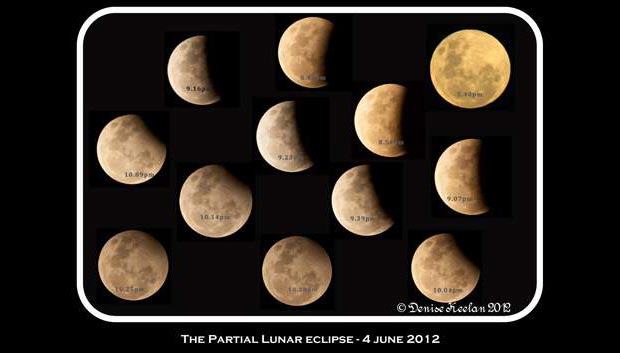 Kingaroy photographer Denise Keelan has captured the first of this week’s feast of astronomical events, putting together a striking collage of last night’s partial lunar eclipse.

The eclipse, the first of the year, was visible over most of Australia and south-east Asia.

A lunar eclipse occurs when the Earth passes between the Sun and the moon. The earth’s shadow can be seen slowly creeping across the lunar surface.

The week’s second major astronomical event, the Transit of Venus, will occur on Wednesday.

Venus Is On Her Way …

A coronograph on board the SOHO spacecraft has been watching the approach of Venus towards the sun. In the YouTube video above, the actual disk of the Sun is blocked by an occulting disk, seen here in blue, so that SOHO can observe the much fainter features in the Sun’s corona. The actual size of the Sun is represented by the white circle.