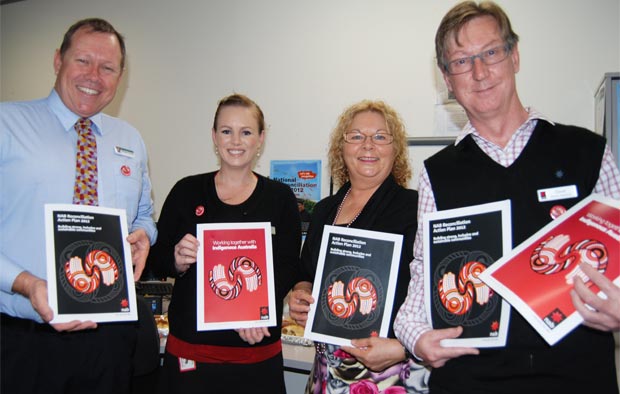 The National Australia Bank has marked National Reconciliation Week by announcing it will hire an indigenous trainee teller at its Kingaroy branch.

At a morning tea to celebrate National Reconciliation Week held in the bank on Friday, newly-appointed branch manager Dave Vickery said the NAB’s Reconciliation Action Plan was part of its commitment to building stronger communities and showing respect to Australia’s first people.

He said the NAB had a history of working with Aboriginal and Islander communities. In 2007, it partnered with the Traditional Credit Union to offer banking services in remote areas of the Northern Territory.

NAB adopted its first Reconciliation Action Plan in 2008 and has been making steady progress since then. It now has about 140 indigenous employees across Australia.

“We are going to support that focus in Kingaroy by arranging an opportunity for a Year 10 trainee to be employed locally,” Mr Vickery said.

“We hope to start them on a really great career path.”

The trainee will be paid to work one day a week and be offered the opportunity to work full-time during the school holidays under a two-year commitment by NAB.

National Reconciliation Week is held every year from May 27 to June 3.

Preceded by National Sorry Day on May 26, National Reconciliation Week is framed by two key events in Australia’s history: the May 27, 1967, referendum that saw more than 90 per cent of Australians vote to give the Federal Government power to make laws for Aboriginal and Torres Strait Islander people and recognise them in the Census, and the High Court’s Mabo decision on June 3, 1992, which recognised Native Title.