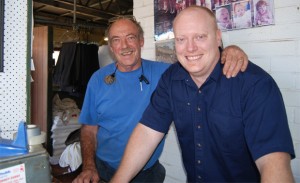 There’s a new face behind the counter at Kingaroy Dry Cleaners … and he’s travelled a long way to get there, via France, England, Scotland and Ireland.

David trained as a chef in Brisbane before heading off overseas.  In 2003, he won a  scholarship to study wine marketing and packed his bags for Angers in the Loire Valley, France.

It was then off to the UK where he worked at Canary Wharf in London. He met his future wife Nuala while working in Scotland. The couple married in 2007 and moved to Limerick, Ireland.

They now have two young children, Rebecca and James.

It was the young family that started David looking around for a new business.

“Fifteen years is a long time to be in the hospitality business,” he said.  “I worked at nights and on weekends and I was missing out on so many family things, like birthdays,” he said.

“I wanted a life again, and family life made me change my focus.”

He was working at the Vineyard Cafe at Ballandean when he decided to make an offer on the drycleaning business last year.

“It was the right time, the right place and a good opportunity,” David said.

Is Barry sad to go?

And he knows David will make a go of the business: “He’s never been afraid to do a bit of work.”

However Barry won’t be disappearing off the scene.  He’s now  teaching David all the tricks of the trade, especially different care techniques and the skills to identify different fabrics.

ABOVE RIGHT: Barry and David Black