There’s another big weekend of rugby league coming up in the South Burnett, this time honouring the memory of one of the local greats of the game.

The Frank Fisher Cup will be played on Saturday and Sunday at Jack O’Chin Oval in Cherbourg.

The Queensland Rugby League has joined with the South Burnett Rugby League to host this inaugural QRL Central Region event.

It has been named in honour of legendary Cherbourg sportsman – and proud Birri Gubba man – Frank “Bigshot” Fisher who twice played against a touring Great Britain side in the 1930s (see below).

Indigenous teams will be travelling from across the Central region to take part.

The games on Saturday and Sunday follow a lead-up week of activities at local schools and clubs focussing on resilience, respect, health and well-being.

On Saturday morning, a special NRL clinic will be held on Jack O’Chin Oval for young players aged 6-14.

The first 100 children to register and turn up will receive a free shirt.

On Saturday evening, there will be a barbecue at the oval from 7:00pm with live music by Muddy Flats. 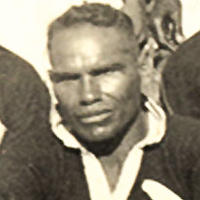 This is what southburnett.com.au wrote about Frank Fisher when a sports exhibition was opened in 2014 at The Ration Shed in Cherbourg:

Outside Cherbourg (and rugby league circles), Bigshot Fisher is usually referred to as “Cathy Freeman’s grandfather” … but in the South Burnett, he’s a legend in his own right.

Racism – there is no nice way of saying it – stopped Frank from shining on the international rugby league stage, but he did get the opportunity (twice) to turn out for Wide Bay against Great Britain touring teams in the 1930s, where he made a huge impression.

In fact, he was offered a contract in 1936 from an English rugby league club but the State Government refused his passport application.

The ultimate accolade was his selection in the Indigenous Team Of The Century in 2008 alongside modern rugby league greats such as Eric Simms, Steve Renouf, Greg Inglis, Johnathan Thurston, Arthur Beetson and Cliff Lyons.

Not bad for a man who was rarely allowed to play league at the level his talent deserved!

Frank was also handy with a bat and ball.  He once hit 105 runs in 32 minutes while playing cricket for Cherbourg against Goomeri – including 11 sixes and five fours.

In 1996, the new bridge heading into Cherbourg was named in his memory.