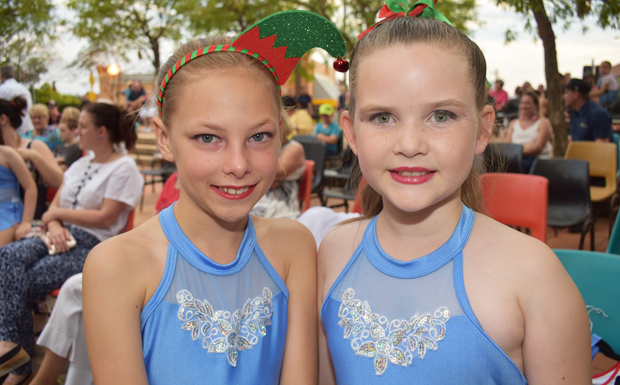 Rheedyn George, 10; and Brydee Pszkit, 9, from Kingaroy, were part of the large team from the Ally Walker Dance Academy which performed on stageDecember 22, 2019

A massive clap of thunder, which startled country singer Larry Cann on stage, was the closest the Kingaroy Christmas Carnival came to promised rain this year.

Rain and Kingaroy Christmas Carnivals have a reputation for going hand-in-hand – and a storm had been predicted earlier in the day – but sadly for everyone hanging out for the manna from heaven, it was not to be.

Carnival organisers, though, probably sighed with relief when the night went off without any major hitches.

A large crowd watched the performances on stage in O’Neill Square, including energetic displays by the young dancers from the Ally Walker Dance Academy, and songs by local country singer Larry Cann.

Santa also made his customary appearance, chauffeured into Kingaroy on a fire engine with sirens blaring.

After greeting his many young fans, Santa retired to the Old Railway Station building for photos.

All the regular attractions kept visitors happy … amusement rides in Haly Street, a climbing wall and novelty stalls in Kingaroy Street and an animal nursery behind the Commonwealth Bank.

Old favourites such as the Taabinga Rotary hamburger stand and the Kingaroy Lions’ ham wheel also returned for more.

It was a fun night, but no one would have complained too loudly if it had rained …