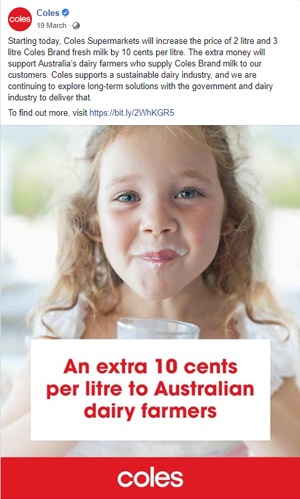 An example of a social media post made by Coles during the campaign, supplied by the ACCC

A drawn-out legal battle over milk payments to farmers has been avoided after a commitment from Coles to pay processor Norco about $5.25 million for distribution to its dairy farmers.

The payments follow an ACCC investigation into whether Coles fully passed on to Norco a 10 cents per litre (cpl) price rise it charged consumers for Coles branded fresh milk, as it claimed it would do in advertising.

Coles has committed in writing to the ACCC that it will pay an additional 7 cpl for 2 litre and 3 litre Coles branded fresh milk, which amounts to around $5.25 million to Norco for milk supplied between April 1, 2019, and June 30, 2020, resolving the ACCC’s investigation.

The ACCC had been investigating allegations that, in a media release, social media posts and in-store signage, Coles represented that the full benefit of the 10 cpl retail price increase of its Coles branded 2 litre and 3 litre milk announced on March 19, 2019, would be passed on to farmers.

The ACCC’s investigation focused on claims that when an unrelated 6.5 cpl increase began on April 1, 2019, Coles reduced its payments to Norco under the 10 cpl retail price increase from 10 cpl to 3.5 cpl.

“We were fully prepared to take Coles to court over what we believe was an egregious breach of the Australian Consumer Law. We believe we had a strong case to allege misleading conduct by Coles,” ACCC chairman Rod Sims said.

“Accepting this commitment means that farmers will receive additional payments from Coles, with the majority of the money to be paid to Norco within seven days.”

“Court action would also have taken many months if not years, with no guarantee that any money would have been paid to farmers as a result,” Mr Sims said.

The marketing statements made by Coles included:

“An extra 10 cents per litre to Australian Dairy Farmers” and

“Coles will pass the extra 10c per litre to processors who will distribute all of the money to the farmers who supply them with milk for Coles Brand.”

“Coles allowed farmers, consumers and the Australian public to believe that its 10 cpl price rise would go straight into the pockets of dairy farmers, when the ACCC alleges this was not the case for Norco farmers,” Mr Sims said.

The ACCC understands Coles did pass on the 10 cpl retail price increase to other dairy processors.

The Norco co-operative has 326 farmer members on 214 dairy farms in northern NSW and Queensland.

“We take commitments made to us very seriously. The ACCC will be keeping a very close eye on Coles to ensure they follow through on this commitment, and we are not ruling out future litigation if necessary,” Mr Sims said.

Coles has committed to pay a lump sum to Norco for distribution to farmers within seven days, which represents an additional 7 cpl base milk price increase for the period between April 1, 2019, and December 1, 2019.

Coles will then also pass on the extra 7 cpl to Norco farmers for the period between December 1, 2019 and at least June 30, 2020, by increasing the base milk price paid to Norco for 2 litre and 3 litre Coles branded fresh milk by 7 cpl.

The additional 7 cpl is more than the 6.5 cpl amount which the ACCC alleges was not passed through to Norco farmers.

Coles has committed to providing an independent audit report to the ACCC confirming that it has paid the full 7 cpl to Norco and has committed to working with Norco to verify that Norco has passed this through to farmers. 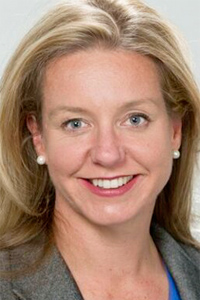 “I am even more delighted that these dairy farmers from northern NSW and Queensland will receive their share of the $5.25 million owed before Christmas and will be receiving an extra 10.5 cents per litre going forward,” Minister McKenzie said.

“The Liberal and Nationals Government invested an extra $8.1 million in the ACCC’s agriculture unit, creating a dairy specialist role so that competition law could be adequately policed.

“This outcome is good for our dairy farmers and a great demonstration of competition law regulation at work.

“The ACCC conducted an investigation into whether Coles fully passed on to Norco dairy farmers the 10 cents a litre price rise it charged its customers for Coles branded two and three litre milk.

“It beggars belief, given the volume of marketing material and media coverage Coles received when it applied the 10 cents to its two and three litre products, that the commitment was honoured for just 11 days.

“In what the ACCC characterised as ‘an egregious breach of the Australian consumer law’ Coles used a previously agreed price increase to offset the 10 cents a litre promised so that farmers actually received 3.5 cents more while customers paid 10 cents.

“Consumers who thought they were supporting farmers were being duped.

“I’m pleased that the ACCC will continue to closely monitor Coles and it has not ruled out future litigation if necessary.

“The supermarkets must ensure our dairy farmers are paid properly for their safe, nutritious and delicious milk.”

On Twitter, Coolabunia dairy farmer Damien Tessmann – who has long been campaigning for a fairer price for milk in supermarkets – commented:

We’re not whingers, we just want a fair bloody go! This is the reason why government must get the Dairy Code of Conduct right. Farmers shouldn’t have to take supermarket giants to the ACCC to get a fair price for milk.

One Response to Coles Pays $5.25m To End Milk Dispute