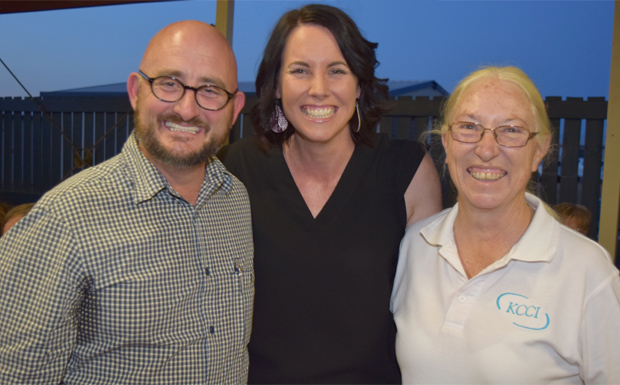 The Kingaroy Chamber Of Commerce and Industry will have four new faces on its executive in 2020.

At the group’s Annual General Meeting and Christmas break-up on Tuesday night, president Rob Fitz-Herbert and vice-president Brett Irwin announced they had decided to stand down from their roles so the Chamber could refresh itself.

Rob told the 60 people in attendance he had been on the Chamber executive for five years and served as president the past two, and Brett had given similar service.

The pair had decided it was time the Chamber took advantage of its extensive membership to give others the opportunity to put their stamp on its activities.

Delivering the annual President’s Report, Rob said the Chamber had enjoyed another successful year despite the effects drought was having on the local economy.

The KCCI now had representatives on the Police Consultative Committee, the Council’s Disaster Management Committee and the Tourism Advisory Committee, allowing it to have input in three areas that were particularly important to many businesses.

It had also successfully lobbied the South Burnett Regional Council to upgrade its target for local purchasing, and had supported a range of community activities ranging from BaconFest to Pink Up South Burnett.

The group had also welcomed a number of new businesses to the area over the previous year and launched an upgraded website to improve communications with members.

Against this, issues the Chamber was still working on included getting CCTV installed in the CBD; securing a bigger local slice of State and Federal Government-funded construction projects; and seeing progress on Kingaroy’s revitalisation.

Hobbs and Associates were reappointed as the group’s auditors.

The Taabinga Rotary Club used the meeting to hand out $11,500 in cheques to several local groups and good causes, and also warn that unless new members joined up soon it was possible the group would cease to exist.

This year Bookarama had raised over $11,000 … but it may be the last unless new members stepped forward.

Paul reminded the audience that many years ago Kingaroy had four service clubs – Kingaroy Lions, Kingaroy Rotary, Taabinga Rotary and Apex – and together they helped build many of the parks, gardens and other community facilities still in use today.

However Apex ceased to exist several years ago due to a lack of new members, and he was concerned Taabinga Rotary could do the same.

The club handed out cheques to:

The club will also be donating another $1000 to polio research later this year – a special Rotary-led project that battles the disease world-wide.

The date and venue for the first Meet’n’Greet of 2020 has yet to be decided, but will be announced on the KCCI’s website.

The six-weekly meetings are open to all South Burnett businesses – whether they’re KCCI members or not – and are held at a different local business each time.

One Response to New Faces For Kingaroy Chamber