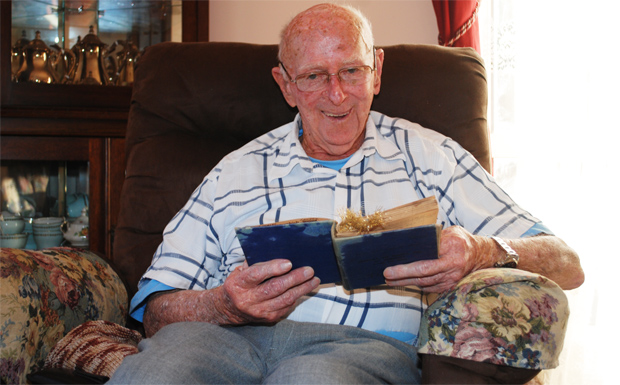 FLASHBACK: Paul Tunn at home in Yarraman in 2014 with his log book which detailed his training and 36 sorties over Europe during World War II

A funeral will be held next week for former Yarraman resident – and Bomber Command airman – Vincent “Paul” Tunn who died on Monday aged 97.

Paul was a well-known for his participation in Anzac Day ceremonies in the local region, and in 2015 was awarded the French Legion Honour for risking his life during the liberation of France.

His funeral will be held next Thursday (November 14) from 1:00pm at Our Lady Help of Christians Catholic Church in Nanango, followed by interment in the Yarraman Cemetery.

Paul was born on January 24, 1922, at Indooroopilly in Brisbane.

He attended primary school at Brigidine Convent in Indooroopilly and then St Joseph’s College, Gregory Terrace from the Scholarship exam until Senior.

He was still in contact with Gregory Terrace as one of their very oldest ‘old boys’, and may well have been the oldest until this month.

Paul’s childhood interests included swimming in the Brisbane River under the Indooroopilly Bridge, tennis, hiking to Lone Pine and Mount Coot-tha, and his much loved cricket, but apparently he was not a very good player himself.

His first job was in the Brisbane office of Darling Downs Bacon, taking orders.

He attended Teachers’ Training College in Turbot Street, Brisbane, in 1940 and did his prac teaching at Windsor State School. He was appointed to Roma State School in 1941, followed by Gunnewin State School and then Strathdickie State School near Proserpine in 1942.

Paul joined the RAAF in December 1941 and was called up for training in mid-1942, which he completed at Sandgate, Kingaroy, Maryborough and Evans Head.

He was attached to RAF Bomber Command in England from 1943 until mid-1945 as a wireless operator flying in Halifax aircraft. He undertook 36 bombing operations with 158 Squadron based at Lissett in Yorkshire, and spent his 21st birthday on a train in Yorkshire.

After the war, Paul returned to teaching in and around Rockhampton, and attended an ex-servicemen’s course in Brisbane to refresh his teaching skills.

In January, 1947, he was appointed to Dalby State School, starting on the same day as Janet Crosbie, a home economics teacher, who Paul knew as Jan and affectionately as ‘Croz’.

Paul lived with his parents who were running a newsagency in Dalby, and rode to school on a bicycle, often arriving right on the bell. He continued teaching at Dalby, and undertook relief teaching at Glenmorgan and other one-teacher schools.

During the August 1949 school holidays, Paul went to Brisbane to buy an engagement ring and he and Jan were married on December 31, 1949.

As women were not permitted to keep teaching once they married in those days, Jan was kept very busy with Greg born in 1950, Jenny in 1952, Chris in 1954, Elaine in 1956 and Peter in 1958. She was a skilled dressmaker, a good cook and very adept at making ends meet on a single income.

In addition to teaching, Paul was an excellent handyman and carpenter, and had a great love of cars.

His first car was a Dodge utility, and family cars over the years included an Armstrong-Siddeley (on Paul and Jan’s honeymoon), Austin A40, Austin A50, Dodge Plymouth and DeSoto, and Ford LTDs. In more recent years Paul had a series of Mercedes, probably his favourite car of all.

Paul, Jan and their family moved to the Redcliffe Peninsula in 1961, building their home at 329 Scarborough Road, Scarborough, with a War Service housing loan. Paul was appointed to Humpybong Primary school in January 1961, teaching there until his retirement in January 1982.

Trips included many visits to Canberra and North Queensland, Darwin in 1974 (before Cyclone Tracy), and caravanning around Australia in 1991.

In 1993, Paul participated in a reunion of his airforce crew in England, and also attended Bomber Command commemorations in Canberra when a new memorial was unveiled. He and Jan did a further trip to Western Australia in 1995.

Paul and Jan moved to Yarraman in August 2003 after visiting the town for regular caravan holidays, since they first discovered it in 1996.

They enjoyed the peace and quiet of country living into their nineties, becoming part of the Yarraman community.

In May 2015, Paul was awarded the French Legion of Honour for risking his life in the liberation of France during World War II.

Paul was a long-term member of the Redcliffe RSL and an active participant in Anzac Day ceremonies for decades, and in recent years he laid a wreath of remembrance at the annual service in Yarraman.

Despite failing eyesight, Paul remained in his own home until he broke his hip a year ago, and in March this year he and Jan moved into residential aged care at Bli Bli to be closer to family members.

Paul died in Bli Bli on November 4 after a stint in Buderim Private for treatment of a serious ankle infection. Had he lived another eight weeks, he and Jan would have celebrated their 70th wedding anniversary.

He was well respected in the local community for his war service, his commitment to the Catholic Church, and as a true gentleman and a good neighbour. 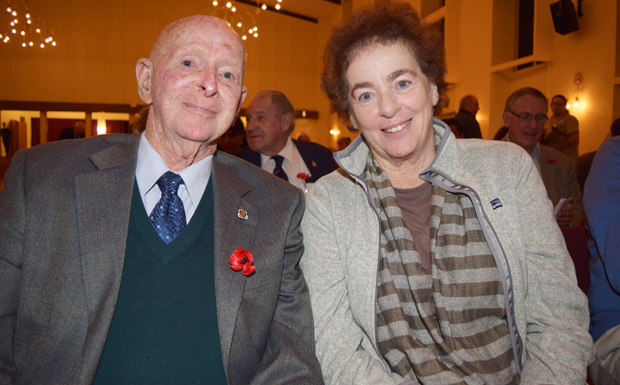 FLASHBACK: Paul Tunn and his daughter Jennifer Hunt were special guests at the launch of the limited-edition photobook, “Poppies For Remembrance”, in Kingaroy in 2014