A Thank You To A Quiet Hero 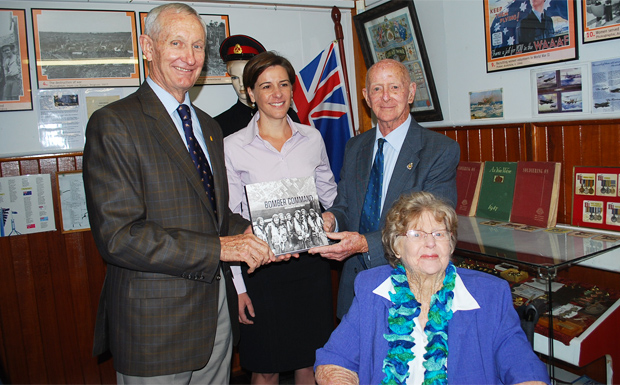 If you spotted 90-year-old Paul Tunn in Yarraman you wouldn’t guess the amazing stories this quiet ex-teacher could tell you … of night bomber raids over Germany during World War II,  daylight missions and watching colleagues being shot out of the sky.

Paul, who was born in Indooroopilly in 1922, completed teacher training after leaving school and was sent to Roma to start his career.

But then Japan entered the war, and he applied to join the air force.

In the meantime, he’d been transferred to a tiny town about 80km north of Roma … about as far away from the war as you could get. However life was about to get very interesting for this junior country town teacher.

His father signed the necessary papers and he enlisted in July 1942.  Paul completed his training as an air gunner and quickly went through the ranks: AC (aircraftman),  LAC (leading aircraftman) and finally Sergeant before being shipped off to England.

Landing there, he was attached to 158 Squadron at Lissett in Yorkshire and was remustered as a wireless operator (fortunately, as gunners had notoriously low survival rates).

It was not an RAAF unit; he was attached to the RAF and all the aircrew on his Halifax four-engine bomber were English.

Their first raid occurred just after D-Day (June 6, 1944) and from then to December, 1944, they successfully completed 36 operations without losing any crew members.

“We had a charmed run,” Paul said.

But it wasn’t always easy sailing. The Halifax was attacked on its very first raid but their mid-upper gunner managed to despatch the German fighter and was credited with two “kills”.

On their third run, they were attacked again. This time the pilot evaded the fighter by putting the big bomber into a stall which caused it to suddenly drop.

“It frightened the hell out of all of us,” Paul said.

On another occasion, ground crew counted 43 holes in the Halifax after it was caught in spotlights over a German town. Some of the holes were big enough to put a hand through.

“The ground crew were amazed that we had made it back,” he said.

After completing six or seven operations, he applied for a commissioned rank. He was promoted to Pilot Officer and then Flying Officer.

Paul saw his fair share of death along the way (851 members of the Squadron died during the war). But one incident gave him a pleasant surprise many years later.

“One of my dear friends was on one of his last operations. I was looking out the window and I saw them take a direct hit and blow up. I thought he had been killed instantly,” Paul said.

However, at a 50-year reunion of  158 Squadron, he spotted his long-lost friend, a Belgian navigator. This man – contrary to common practice – had always worn his parachute during missions.

“He suddenly found himself floating through the air. His hand was on his ripcord, so he pulled it,” Paul said.

Paul was part of Bomber Command, the thousands of Allied airmen who laid their lives on the line to protect Britain during the war.

Back in June a group of these very special Australian World War II veterans travelled to London for the unveiling of a £6m memorial to the 55,573 aircrew killed during the war.

The memorial has been a long time coming for the veterans, and only came about after years of campaigning by them and their families

Unfortunately, Paul was unable to make the trip because of health reasons but his service was honoured in a special way recently.

Federal Member for Maranoa (and former Veterans Affairs Minister) Bruce Scott and Member for Nanango Deb Frecklington presented him with a commemorative book about Bomber Command during a small ceremony at Yarraman’s military museum in Heritage House.

About 10,000 Australians served with Bomber Command; 3486 were killed in battle and a further 650 died in training accidents.

Bomber Command made up just 2 per cent of Australian forces during the World War II but accounted for 20 per cent of the casualties.

The Nazis couldn’t get Paul, but diphtheria did … the disease laid him low for two months and in the meantime his squadron had been sent to India for transport services.

He returned home to Australia and resumed his teaching career, teaching in Rockhampton, Dalby, Jimbour and Warwick. Along the way he met his future wife, Jan, and they married and had five children.

They lived in Scarborough for 43 years but often used to take caravan trips to the South Burnett. And on one trip they spotted a house for sale in Yarraman and decided to buy it.

That was eight years ago, and the rest, as they say, is history …