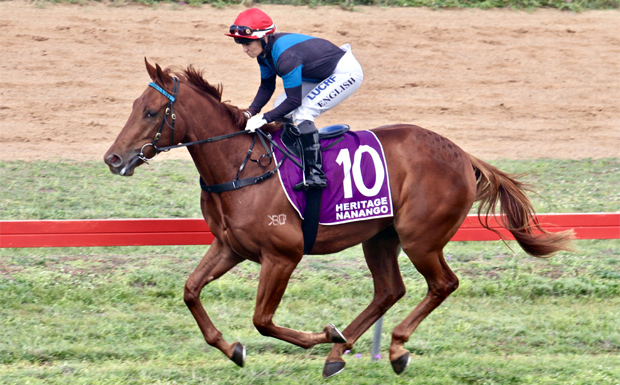 Succinite (with Hannah English aboard) pictured at Nanango at Easter (Photo: Ross Stanley)

Although the Glenn Richardson trained Succinite is by Amber Grey (GB), the two-year-old met six red lights as it aimed for the winner’s circle.

It was worth waiting for the lights to change at Roma on Saturday.

The chestnut gelding’s cheque for taking out the QTIS Ezyquip Maiden Plate for Two and Three-Year-Olds (1200m) with Stephanie Lacy aboard exceeded the amount earned by the second placegetters at Eagle Farm on the same day.

The $5.50 chance had shown potential by finishing fourth or better in its half dozen lead ups to the breakthrough.

In particular were the pair of close seconds at Rockhampton earlier in the current campaign.

Stewards reported that Succinite “began awkwardly and lost considerable ground. It raced wide during the middle stages and laid in under pressure in the home straight.”

Galileo, Choisir, Flying Spur and the legendary Northern Dancer are some of the stallions listed on Succinite’s pedigree page.

Richardson part-owns Succinite along with his brother Lionel, his mother Glenda, Hannah English’s father Frank and her grandmother Noelle Bartlett.

PS: Those interested in seeing the Roma race can view a video of it by clicking here.

First Bid proved there was no fluke about its close fourth in a Dalby Class 2 at 150/1 earlier this month by chalking up a commanding victory in BM 55 company over 850 metres at Bundaberg on Saturday.

The Siderus gelding, raced by Barry Goodwill and his trainer Janene Armstrong, jumped with the field and led on the corner before running away to post a five length margin.

The sprinter, with his trackwork rider Hannah Phillips in the irons, started at $8.

The chestnut was stepping out for just the second time for Armstrong, an equine therapist who is based at Ballogie, a spot between Kingaroy and Proston.

She prepared thoroughbreds at Mount Isa for a couple of years around three decades ago but her main involvement has been with greyhounds.

Her most recent successes in the code were recorded at The Isa and North Queensland.

In a few weeks time, Janene will saddle the bay up for her initial engagement for her new yard.

Although the Richardson team also collected second place money with Sophie Wilcox’s mount Eight Over ($2.70) in the Class 4 Plate at Roma, Bundaberg was a source of disappointment.

Kym Afford also had a frustrating outing at Bundaberg.

His tally embraced second placings with Targets and Star Painter, a third with Rockshore and unplaced contrbutions by Gossiaux and Cyclone Mia 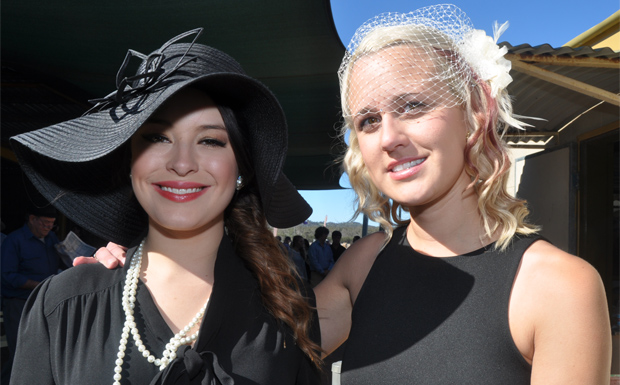 FLASHBACK: Karlee Dickson, from the Sunshine Coast, and Christie Young, from Kingaroy, were dressed to the Nanango Cup's traditrional Black and White fashion theme at the 2013 Cup meeting

Lee Park will be a busy venue this Saturday, August 3.

There will be 2018-19 premiership presentations, the traditional Blessing Of The Jockeys ceremony to wish the riders well for the brand new season, a Classic Black and White Fashion theme and a visit by participants in the Dunga Derby.

One Response to Green Light For Succinite