Wondai’s Day Of Lows And Highs 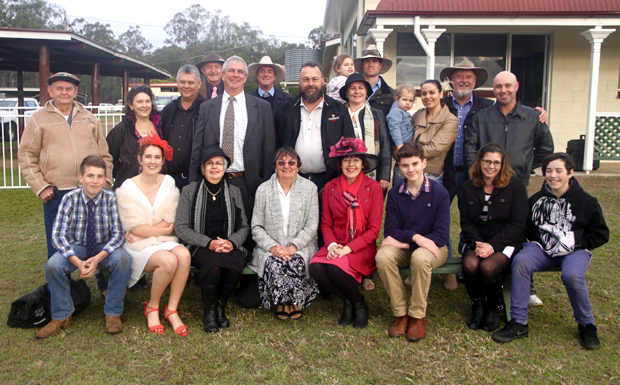 Part of the Duff family gathered for an “after the last” group photograph at Wondai’s Winter Race Meeting (Photo: Ross Stanley)

On one hand, two groups were remembering the lives of lost loved ones. And on the other, district gallopers took the honours.

His contributions to Wondai stretched back for more than four decades.

Six years later he took up training, collecting seven local premierships between 1986 and 2002.

He picked up a Brisbane city event with Station Sunset.

Minna Marie, a grey mare by Royal Yacht, was a handy cuddy and My Finale, Princess Dignitas and Ivanhoe Devil were just some of the many thoroughbreds he greeted at a winner’s circle.

Hartwig had a long and fruitful association with his apprentice Cheryl Crosby (now Dennien).

She was a leading rider in her day.

“Robin really taught me how to have a clock in my head and judge pace. The timing developed through practice while riding trackwork,” Cheryl said as she fondly recalled that, with her master’s help, she was the first female to outride her claim.

“Fifty-six wins were recorded in eighteen months,” she added on Saturday between her tasks as a barrier attendant.

The Hartwig and Crosby pairing prospered with Fair Summer’s son Ormiston, the runner-up in Townsville, Rockhampton and Kilcoy Cups.

It was fitting that Lindsay Anderson saddled up Clouds, the hero in the Lewis Duff Memorial Handicap (1100m).

The Hivesville trainer’s team do their fast work at Wondai.

Naturally he and Hartwig were great mates.

Condolences are extended to Robin’s wife Robyn, his children Scott and Melody, the extended family and his numerous friends. 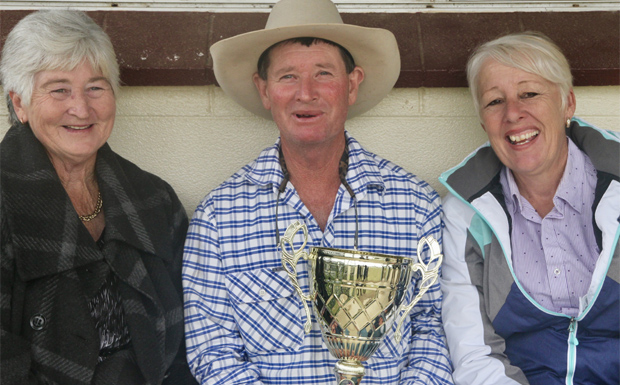 There was some joy for Robyn Hartwig, Lindsay Anderson and Cheryl Dennien after Clouds earned the Lewis Duff Memorial trophy (Photo: Ross Stanley)

Clouds Had Them Covered

Despite the start the pacemaker Viceman had on him at the half way point, jockey Matthew Powell was always confident that Clouds, the well named gelding by Bradbury’s Luck from Sky Bid, was heading for his ninth career triumph.

The lightly raced seven-year-old motored swiftly up the straight and swept clear over the final part.

Anderson had the evens favourite that prefers trips around 1400 to 1600 metres well tuned for his first chore in more than two months.

Earlier, Quatro Amigos (Amy Van Der Sanden, $7.50), prepared at Bundaberg by Darryl Gardiner took out the Kevin Duff Memorial Maiden (1100 m) to give bookmakers a sound kick off for the program.

Kilkivan based mentor Kym Afford also uses the Wondai circuit for aspects of his string’s preparation.

The bay was handled by Hannah Phillips, the Nanango apprentice who booted home Imabarman ($12) at Dalby on Thursday.

The name of the horse that fought so well means “great huntress” while her dam Diana Cazadora was named for a female Mexican wrestler.

The blue and white crossbelts on the jacket carried by the runner-up Craigslea Cetina was reminiscent of Hartwig’s livery.

The quinella gallopers engaged in a very long duel with a half length the difference at the post.

Anna Bakos continued on her winning way for the Glenn Richardson yard with a last gasp snatch by the sweeper Schindler ($4) in the Wondai Electrical Services BM 50 (1100 m).

In a finish that was incredibly close to a dead heat, the second placed My Certain did not enjoy any lucky breaks in running.

Richardson was also successful with On A Comet (Hannah English, $1.90) at Warra.

His four runs for the stable have yielded two wins, a second and a fourth.

Unfortunately the More Than Ready gelding bled and will be off the scene for at least three months.

English claimed the first at Toowoomba in the evening on General Cos ($10) for Toowoomba conditioner Neville Saunders. 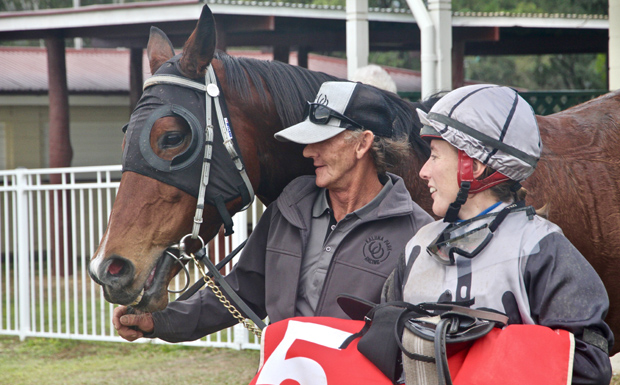