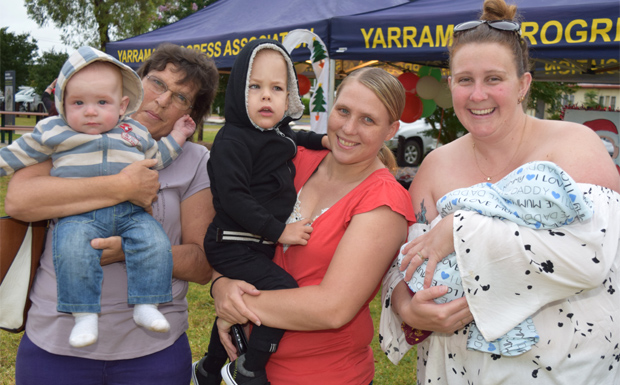 Christmas is for kids … Yarraman mums Sue Kirkland, Karina Webb and Rochelle Moss were happy to show Alec, 7 months, William, 3, and Thomas, 7 weeks, what the festive season was all about

Many Christmas Carnival organisers are nervously eyeing the sky this week worried that Tropical Cyclone Owen could put a dampener on their Friday and Saturday celebrations.

But when the Yarraman Progress Association (YPA) braved the weather on Saturday, they were rewarded with rain not long after Santa distributed the presents.

Ironically, Yarraman hasn’t had a Christmas Carnival for the past few years because of rain.

After the town’s annual Yuletide event was washed out four years in a row, the YPA decided to axe it and move Yarraman’s festive season celebrations to New Year’s Day instead.

That event has gone very well over the past four years, YPA president Joe Stimpson said.

“But this year we decided to hold a Christmas Party as well because a few people pointed out we didn’t have anything on for kids.”

The relaxed three-hour get-together was held at the Yarraman Recreation Grounds on Saturday afternoon.

A focal point was the first outing of one of the town’s new Christmas Trees.

This year the YPA put together $3000 to acquire a pair of the trees, which can be easily assembled and disassembled.

The tree towered over the crowd, heralding the start of Yuletide festivities despite the storm clouds gathering ominously overhead.

Towards evening, Santa arrived in a gaily decorated sleigh (towed by a truck, not reindeer) and was quickly mobbed by hordes of eager children, all keen to meet the jolly gentleman and see if he’d brought them a present.

Santa was more than happy to oblige, dispensing gifts to a seemingly neverending stream of eager young admirers.

Soon afterwards, the sky began spitting rain and within a short time this had turned into a steady downpour.

But no one seemed to mind.

Guests who wanted to stay sat under the tents arranged in the reserve or moved to the sheltered canteen.

Yarraman’s next Yuletide celebration will the annual Community Christmas Carols service at the Yarraman Memorial Hall in Browne Street on Friday, December 21, from 7:00pm to 8:30pm, followed by supper.

The YPA’s next outing will occur be the town’s family-friendly New Year’s Day celebrations at the Recreation Reserve between 5:00pm and 9:00pm, with live music, a licensed bar, food and children’s entertainment. 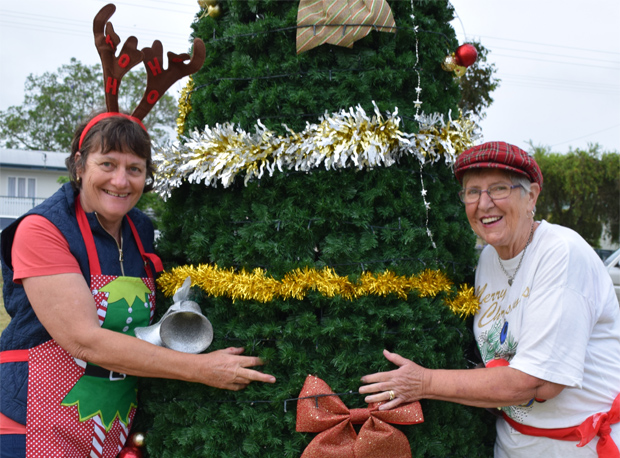 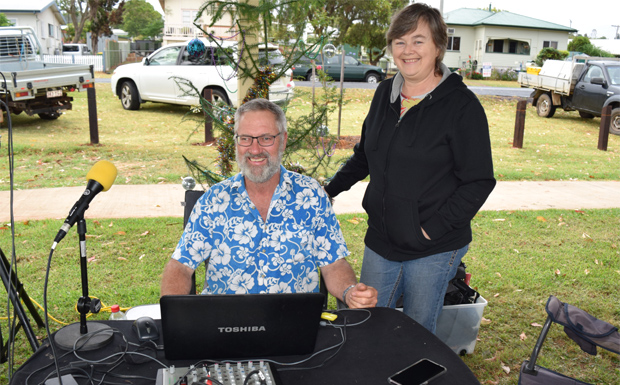 It wouldn’t be a party without music, and Frank Hodgkinson and Tania Paul from Wild Horse FM 99.7 kept the music pumping all afternoon 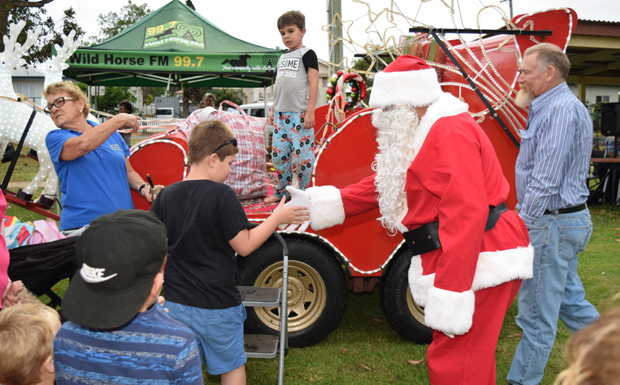 Santa’s arrival in a bright red sled energised the children, who quickly mobbed the man in red 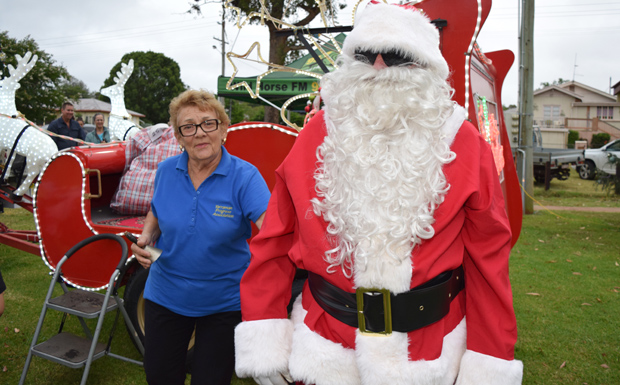 Soon afterwards, Carole Verden helped Santa distribute sackfuls of gifts to queues of fans before the rain started to fall