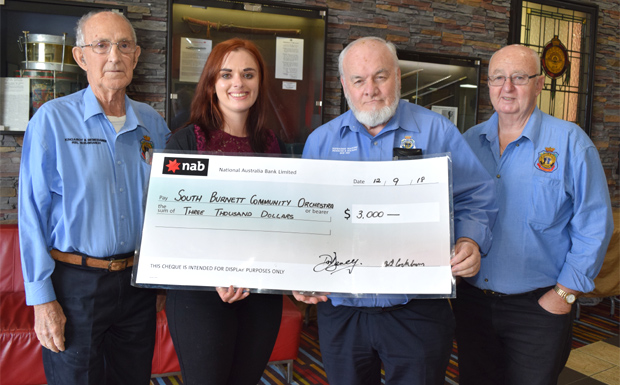 The South Burnett Community Orchestra (SBCO) received a pleasant surprise on Wednesday, thanks to the Kingaroy-Memerambi RSL Sub-Branch.

For months, the SBCO has been rehearsing for a gala charity dinner they’re holding at Kingaroy Town Hall to celebrate this year’s centenary of the Armistice, which heralded the end of World War I.

The evening will feature a three-course dinner, some military ceremony, memorabilia and artwork, and the South Burnett Community Orchestra will be presenting an almost completely new musical program along with performances by the SBCO String Ensemble and a choir.

The dinner will be held on November 10, the night before Remembrance Day, and all proceeds will go to Legacy to assist the dependents of deceased Australian service men and women.

SBCO members have been busy hunting down music from the WWI and WWII eras to present what will be one of the largest concerts the group has staged to date.

So large, in fact, that sourcing the sheet music is expected to cost a big slice of the event’s budget.

And on Wednesday, Kingaroy-Memerambi RSL Sub-Branch stepped forward with a $3000 contribution to help ensure the event’s success.

Jane Kennedy, who accepted the cheque, said the SBCO was grateful for the Sub-Branch’s support.

Jane said it was very difficult to source sheet music for old songs – particularly Australian songs – and the SBCO would be playing such a large repertoire on the night the bills were simply mounting up.

Nonetheless, she said the group was also planning a special all-Australian surprise during the evening.

But because everyone in the orchestra wanted it to be a true surprise, she couldn’t say any more than that.

Tickets to the Armistice Centenary Gala Charity Dinner Concert are $60 per head, and can be booked online through the SBCO’s website or in person from Office Central in Haly Street, Kingaroy.