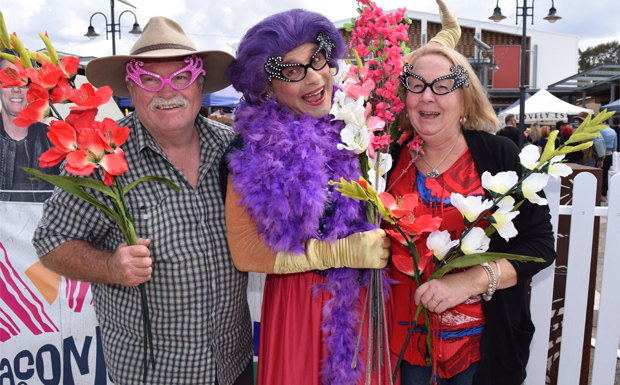 It seemed like everyone came to BaconFest on Saturday, including “Dame Edna” and her friends Dave and Vicki Johnson, from Woodford

The threat of wet weather on the weekend caused some headaches for Kingaroy’s inaugural BaconFest but not enough to stop the main day sizzling.

The Bureau of Meteorology had been forecasting a wet weekend but while parts of Nanango received some showers on Saturday afternoon, organisers breathed a sigh of relief when Kingaroy stayed dry.

However, on Sunday morning the promised rain finally arrived and it was damp until near lunchtime, with the festival winding down a few hours afterwards.

BaconFest kicked off on Friday with a pork industry conference held away from the spotlight at Kingaroy Town Common Hall.

The day-long workshop was capped off with a Wine and Swine cocktail party on Friday night which had originally been planned for the Glendon Street Forecourt.

Unwilling to take any risks with the weather, organisers moved the $102-per-head soiree inside Kingaroy Town Hall where it went off without a hitch.

Dancing continued into the evening.

Saturday morning began early when about 50 cyclists and 50 runners lined up for the “Rail Trail Rasher’s Rush”, with runners tackling a course to Crawford and cyclists a course to Memerambi.

After this, several hundred parents and their children took advantage of the fine morning weather to enjoy “Little Piggies In The Park”, a free event in Memorial Park aimed at children 12 and under that offered free entertainment until about noon.

In Glendon Street, thousands more turned out from mid-morning to enjoy food vans, community stalls, local wines and a variety of entertainment on a stage set up in the forecourt, or cast their eyes over the 20 competitors who were taking part overnight in the Sunpork Smoke Off barbecue competition.

The gold coin entry into the markets raised almost $10,000 for Murgon’s Graham House Community Centre, much to the delight of BaconFest organisers.

The fun and games continued with 10 teams taking part in the inaugural Bacon Olympics – “Piggy Wit It” took home the bacon (5kg of it) – and the stylish Miss BaconFest Pageant.

Earlier this year, BaconFest organisers said they hoped to draw so many visitors to the South Burnett they’d have people camping out on Kingaroy’s front lawns.

This didn’t happen, but the town’s accommodation operators were booked out on Saturday night, with some picking up extra business on Friday and Sunday.

The Kingaroy Showgrounds had a bumper weekend with up to 120 caravanners staying over the festival’s three days, and some coming as early as Wednesday.

BaconFest was funded with about $85,000 in grants and local sponsorships.

Many businesses and community groups also donated their time and resources to it, which ranged from taking part in a BaconFest window dressing competition to manning market stalls and helping out at the festival’s many events.

Organisers look forward to repeating the BaconFest success in 2019. 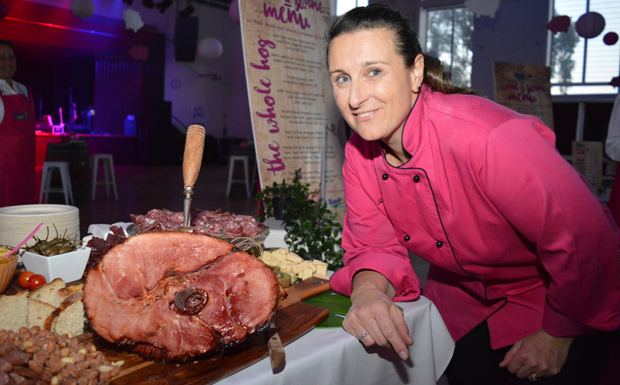 BaconFest kicked off on Friday night with a Wine & Swine cocktail party, which was catered by Roberta Schablon from The Saucy Fork … the threat of rain forced the event to be relocated from the Glendon Street forecourt to Kingaroy Town Hall 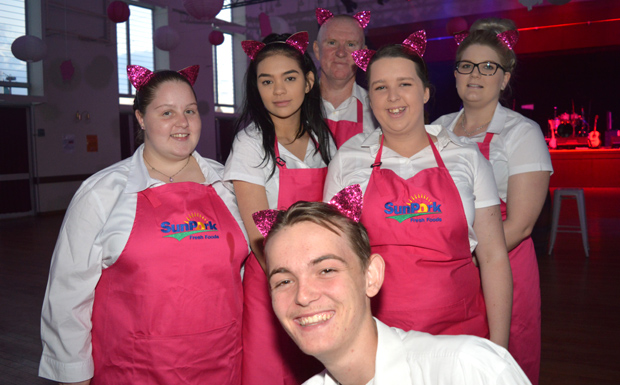 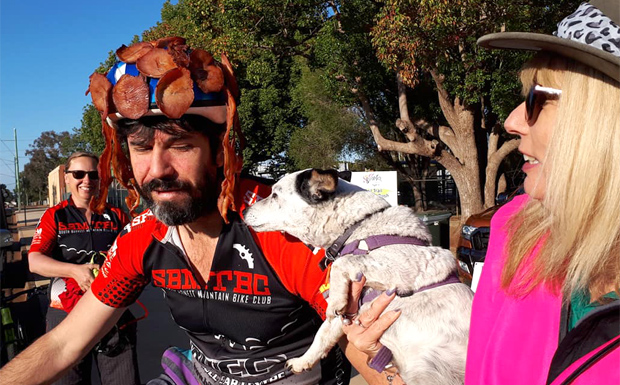 Runners and cyclists lined up in Memorial Park for the Rail Trail Rashers Rush, including one cyclist whose unusual head gear won him an immediate canine fan 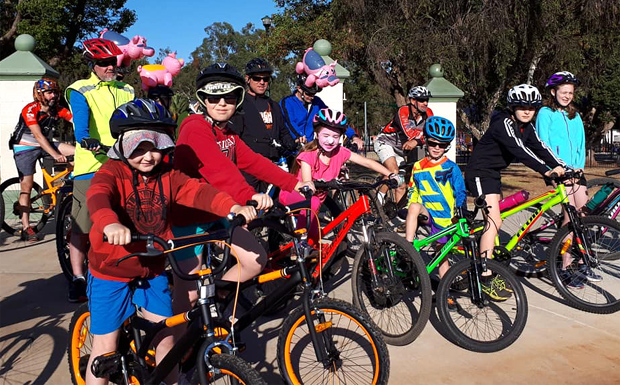 About 50 runners and 50 cyclists took part in the Rasher’s Rush along the South Burnett Rail Trail, with the first 25 registrants receiving a free commemorative shirt 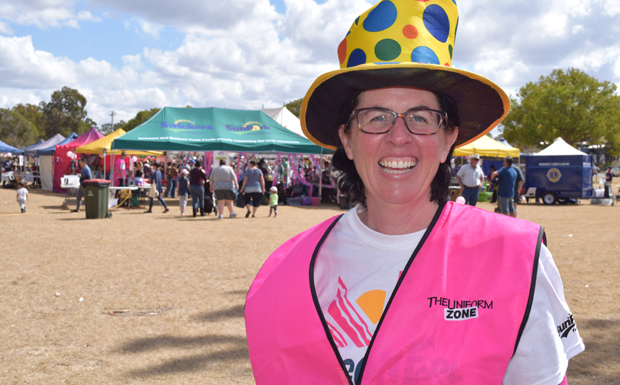 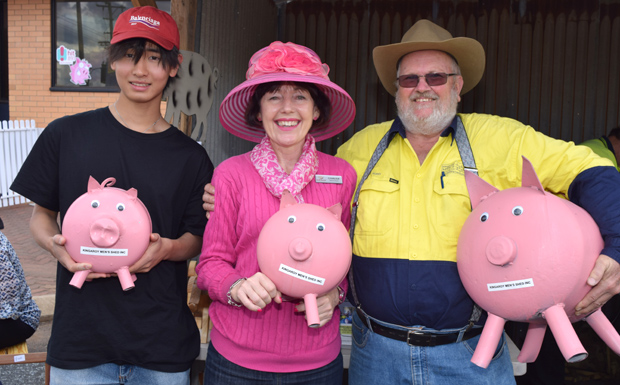 Rotary exchange student Yusuke Takaiwa, from Ishikawa Prefecture in Japan, chatted with Acting Mayor Kathy Duff and Ken Bradley from the Kingaroy Men’s Shed about the pigs the Men’s Shed had created for the occasion … the Men’s Shed also crafted tables and benches for the event 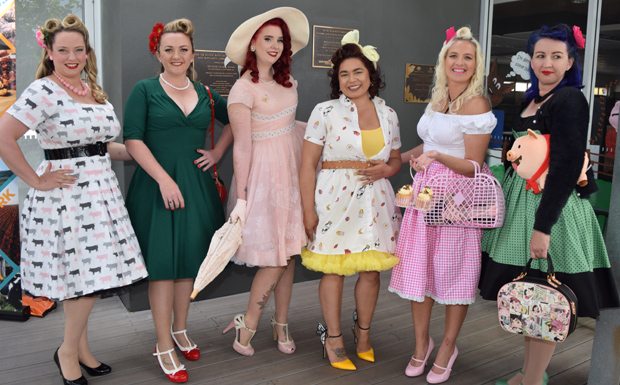 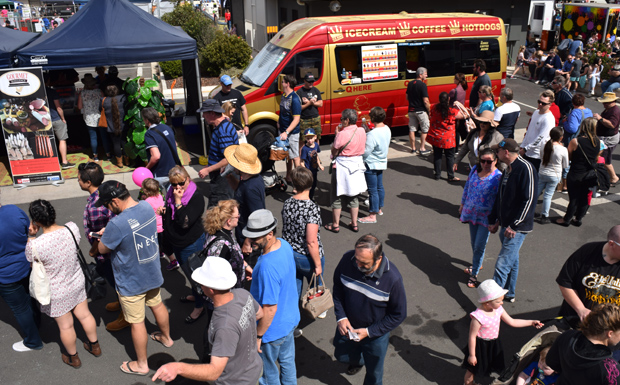 Crowds flocked to the BaconFest Markets on Saturday to try unusual foods, watch cooking demonstrations or enjoy the free entertainment on the festival’s stage … but rain on Sunday morning dampened attendance numbers 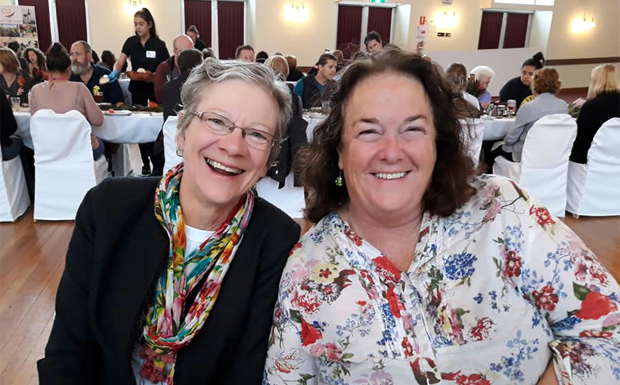 Sunday morning’s Long Table Breakfast also had to be moved inside Kingaroy Town Hall, but with rain coming down outside Cr Ros Heit and Karen Newson, from Proston, appreciated the change of venue 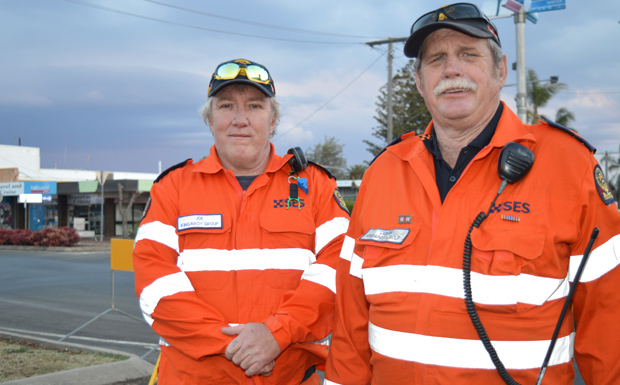 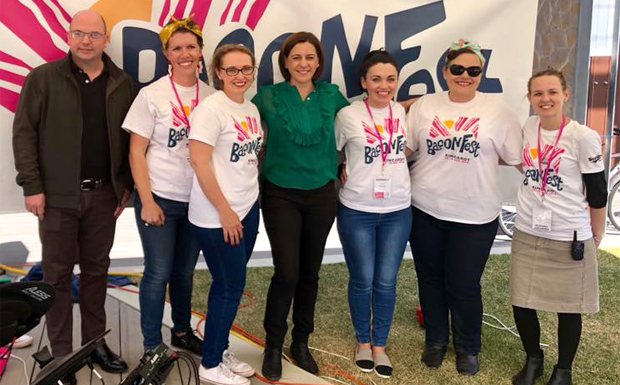 One Response to Kingaroy Enjoys A Pig Time