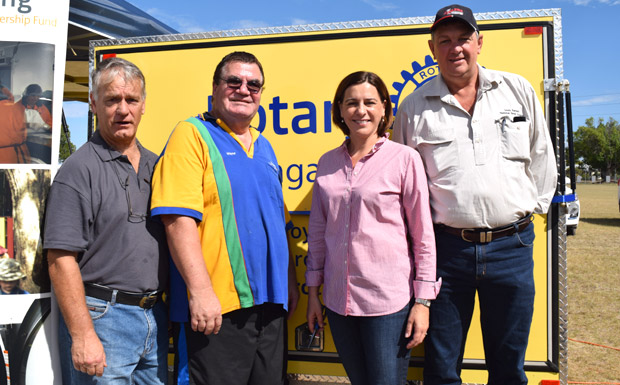 Member for Nanango Deb Frecklington turned down an opportunity to visit the Chinchilla Watermelon Festival on Saturday so she could officially cut the ribbon on Kingaroy Rotary Club’s new camper trailer.

Mrs Frecklington had been asked to appear at the festival along Queensland Opposition Leader Tim Nicholls for his announcement that the LNP will not enter into a coalition with One Nation to form government.

But she’d already been booked by Kingaroy Rotary for Saturday’s ribbon cutting and … well, Tim … a promise is a promise …

The new $25,000 van replaces older equipment Kingaroy Rotary have been using for many years to run barbecues at community events around the region, and it came with all the bells and whistles.

They include a built-in drink refrigerator and food freezer; a fold-out, gas powered barbecue; a fold-out aluminium bench; water storage; a slide-out sink with its own hot water service; and a built-in solar power system to keep everything running smoothly.

The van was built by Eagle Camper Trailers in South Australia.

It was funded with a grant from the Tarong Community Partnership Program, and had arrived just before Christmas.

But with the festive season and school holidays, it took three months to get all the necessary officials together for Saturday’s ribbon-cutting.

The ceremony took place at the Kingaroy Showgrounds Friendship Markets, which Kingaroy Rotary now run in conjunction with the Kingaroy Show Society, while shoppers milled about on what turned out to be the last day of a two week heatwave.

Dennis Franklin, representing Stanwell’s acting CEO Jenny Gregg, said the Tarong Community Partnership Program was delighted it had been able to help Rotary get the new equipment they needed to continue providing their services to the local community.

“This is just the type of project we like to fund,” Mr Franklin said.

“The benefits don’t just sit with one group – they flow through to help many others as well.”

Wayne Bushell, from Kingaroy Rotary, thanked Tarong for their help, and paid tribute to the Kingaroy Show Society for joining with the club to take over the Friendship Markets when they looked in danger of closing.

He said the van would be very useful fundraiser for Rotary at the markets, providing visitors with food while they browsed for a bargain, and at many other community events as well.

Deb Frecklington said she thought Rotary and the Show Society both deserved praise for their community efforts, and challenged them to triple the size of the markets in the next 12 months.

“It just shows what can be done over time, and I think Kingaroy can do the same.”

Kingaroy Show Society president Cliff Seiler said he was very grateful to Rotary for the professional way they organised the markets, which are now held at the Cheers Triangle end of the Showgrounds on the third Saturday of every month.

“We have 40 acres here, so we have a lot of room for expansion,” Mr Seiler said.

Afterwards, Mrs Frecklington and her husband Jason went shopping in the markets, and the Rotarians went back to happily flipping burgers in their modern new trailer.

And out west in Chinchilla, Tim Nicholls made his announcement, then ate watermelon to cool down.