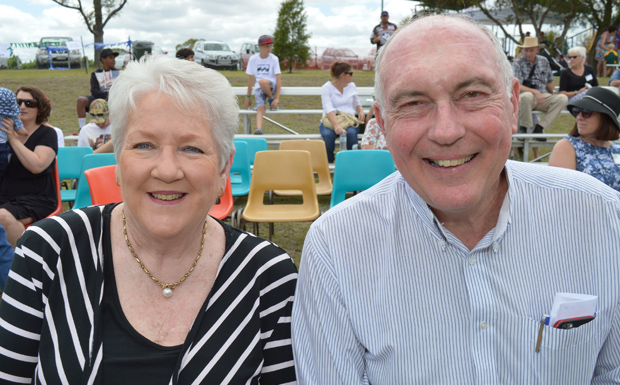 Lyn and Warren Truss ... awarded Life Membership of the LNP

Former Member for Wide Bay Warren Truss and his wife Lyn were awarded life membership of the LNP at the party’s annual convention on Saturday.

Prime Minister Malcolm Turnbull paid tribute to Mr Truss, who retired from Parliament at the last election after serving for 26 years, the last three as Deputy Prime Minister.

“He is a gentle man, a gentle soul but he gets fired up when he looks at the greatness this nation can achieve when we put our hearts and backs into it. Big projects are what excites him,” Mr Turnbull said.

Mr Truss, who was born in Kingaroy, was a farmer before entering politics.

He was chair of the Sugar Coast Burnett Regional Tourism Board and a became a Kingaroy Shire councillor in 1976, then Chairman of the Council from 1983 to 1990 before winning Wide Bay for the Nationals.

When he announced his retirement in February this year, Mr Truss said his greatest pleasure in politics was achieving things for his electorate and individual constituents.

In congratulating the couple on their life membership, Mr Turnbull praised Mr Truss’s commitment to nation-building.

Mr Turnbull said the couple had also stood up for regional and rural Australia during Warren’s tenure in Parliament.

“Lyn – Warren could’ve done nothing without you. You made everything he has done possible,” Mr Turnbull said.

“You two are one of the great political couples of our times.”