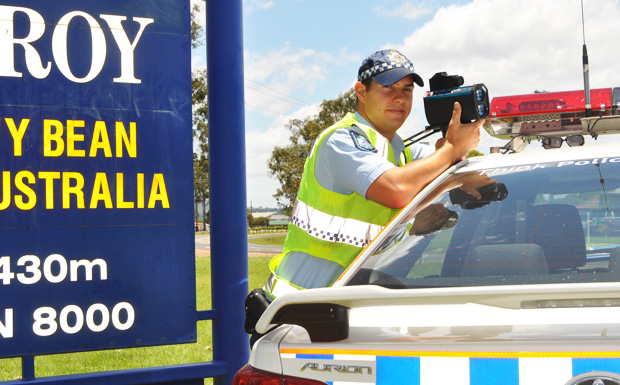 Police are out in force on South Burnett roads cracking down on the "Fatal Four" ... Constable Andrew Day was keeping a close eye on motorists on the D'Aguilar Highway at Kingaroy

Police are out in force on South Burnett roads as part of Operation Q-Blitz in the lead up to the busy holiday period.

The statewide road blitz is targeting the “Fatal Four” in a bid to raise road safety awareness ahead of the dangerous Christmas-New Year vacation period.

And the message is needed …

Currently the road toll in the North Coast Region – which includes the South Burnett – stands at 71 compared with just 50 at the same time last year.

During the first week of Operation Q-Blitz, which began on November 1, 99 offences were detected on North Coast region roads.

Overall, more than 10,000 offences have been detected on Queensland roads in a fortnight.

During week two of the blitz, more than 4060 speed camera and almost 740 other speeding tickets have been issued.

More than 12,000 random breath tests were conducted. Fifty-nine drink drivers and 30 drivers under the influence of drugs have been charged.

A further 996 traffic infringement notices were issued for a variety of other offences.

Police Commissioner Ian Stewart said he was disappointed by the high number of motorists who continued to risk the lives of others around them.

“We are trying to send a message to drivers ahead of the busy Christmas period that ignoring the Fatal Four factors can not only endanger your life, but the lives of passengers and other road users,” Commissioner Stewart said.

“We do not want to see another fatality this year, but the reality is while drivers continue to take these unnecessary risks we will continue to see lives lost on our roads unnecessarily.

“I am asking motorists to slow down, wear their seatbelts, not drink and drive, and not drive tired – they are four things we can do that can save lives.

“If you are going to be drinking at an event, designate a driver before or take a taxi home. It is that simple.”

Operation Q-Blitz will continue across the State until November 30.