It Can’t Be Neglected Any More 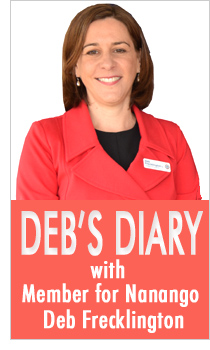 The reduction of the Wide Bay Creek Bridge on Kilkivan-Tansey Road to one lane is an admission by the Labor Government that the bridge and road have been neglected for far too long.

It is unacceptable that the Labor Government continues to neglect regional road upgrades and maintenance.

In fact, the Minister for Main Roads, Mark Bailey, has publicly acknowledged that the 85-year-old Wide Bay Creek Bridge is unsafe.

No funding has been allocated to the Kilkivan-Tansey Road for so long now, and this has resulted in a speed reduction to 60km/h on the approach to the Wide Bay Creek Bridge and the bridge being reduced to one lane.

I have been calling for funding for Kilkivan-Tansey Road for many years now.

But instead of fixing this road, the Labor Government just downgrade it and expect the community to keep using an obviously unsafe bridge and road.

Surely now, this must trigger a need to allocate funding and fix this road.

I call on the Minister to stop overlooking regional roads and provide funding to fix Kilkivan-Tansey Road.

Blackbutt Has A New Community Directory

One thousand copies of the brand new Blackbutt & Benarkin Community Directory have been distributed to the townships and surrounds following its official launch in mid-July.

This handy booklet has been produced by the Blackbutt Tourism and Heritage Association and was put together by volunteers who spent two months sourcing and gathering information about local businesses and services.

Community directories are always very useful for new residents, and even long-standing residents find them valuable when they’re trying to source hard-to-locate services.

I was delighted to support the group by helping print and collate the booklets at my Electorate Office.

Congratulations to the Goomeri Pumpkin Festival Committee for their hugely successful 2021 event.

While the COVID-19 pandemic caused a lot of disruptions to their planning, the Committee persisted to seeing the Festival through to fruition.

The result? 2021 was probably the biggest outing the Pumpkin Festival has seen to date.

There is no doubt the Goomeri Pumpkin Festival has definitely become a “bucket list” event for so many people, and this was evident with the fantastic turnout achieved over the weekend of events.

So much fun – and wonderful for our region, too!

Together with our LNP Shadow Minister for Aboriginal and Torres Strait Islander Partnerships, John-Paul Langbroek, I met with members of the Barambah Local Justice Group in mid-June.

The meeting gave the group the opportunity to highlight key issues affecting the Cherbourg community to us, and we were very grateful to receive their input and insights.

The Cherbourg community has been doing things particularly tough during the pandemic, but inspired leadership from community Elders has helped keep everyone safe.

I look forward to working further with this dedicated and professional group in the future.

The program empowers people to make healthy choices for themselves and their families.

I’d like to pass on a massive vote of thanks to Deadly Choices ambassadors Willie Tonga and Rhonda Purcell.

They both paid a visit to Cherbourg on the day to help the CRAICCHS team – who will be delivering the program – launch things with a bang.

In early July the Murgon RSL Sub-Branch saw the realisation of their vision to create a Drop-In Centre in the town for local veterans.

With my federal colleague, Member for Wide Bay Llew O’Brien, it was an honour to attend the official opening, and see first-hand the beautiful space they have created.

Funding for the project was provided by the Federal Government.

The Sub-Branch tell me they also have plans to expand the complex in future by building affordable accommodation units on their block – another facility that I’m sure many residents in the district would welcome.