‘Star’ Stirs Up Thoughts Of Taroom

Last week’s visit by the “Star Of Taroom” to the South Burnett brought back some vivid memories for one former Cherbourg resident who returned home especially for the visit.

Aunty Lesley Williams – an award-winning author, film producer and historian – grew up in Cherbourg when it was still a government-controlled mission.

She was trained as a domestic and sent out to work in 1964 as a teenager on a property … at Taroom.

When Aunty Lesley heard about the “Star’s” journey back home, she wanted to find out more. And she wanted to make sure the carved sandstone rock – important to the Iman people – could take a detour to Cherbourg so the local Indigenous community, especially the children, could experience the historic occasion.

The “Star Of Taroom” is being walked back to its traditional owners by Johnny Danalis, the son of the man who originally took it to Brisbane in the 1970s.

Aunty Lesley contacted the organisers of the trek to request the detour, and her sister, Aunty Jeanette Brown, made the arrangements in Cherbourg.

The Star Of Taroom was pulled through an honour guard of local students when it arrived at Wakka Wakka Park.

The children from Cherbourg State School, Murgon State High School and St Joseph’s Murgon then joined with community members and the Star Of Taroom trek team to walk the rock from the new yarning circle to The Ration Shed Museum.

Students took turns at pulling the “rockshaw” as it made its way up Barambah Avenue.

Johnny Danalis explained to the children the trek was about paying respect and saying sorry.

It was also about getting the attention of all the white people who have taken things and have them stored under beds, in sheds and now don’t know what to do with them.

“Reach out and talk to the Traditional Owners and start a conversation about returning them. It is a healing thing,” he said.

“I am sorry that my family took this stone. I am trying to put things right.” 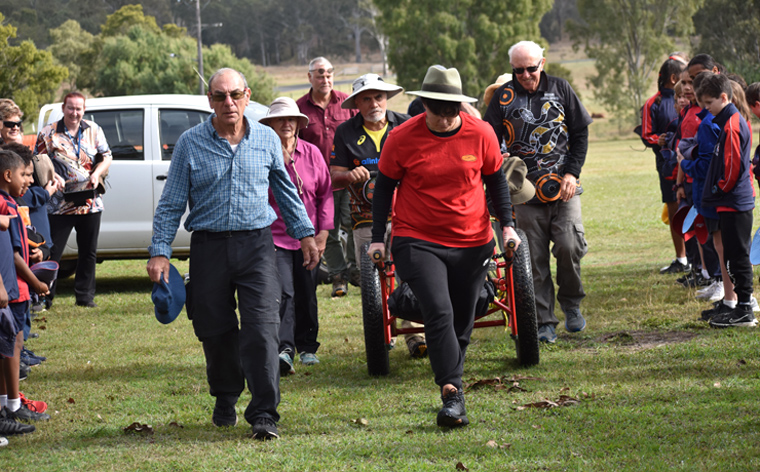 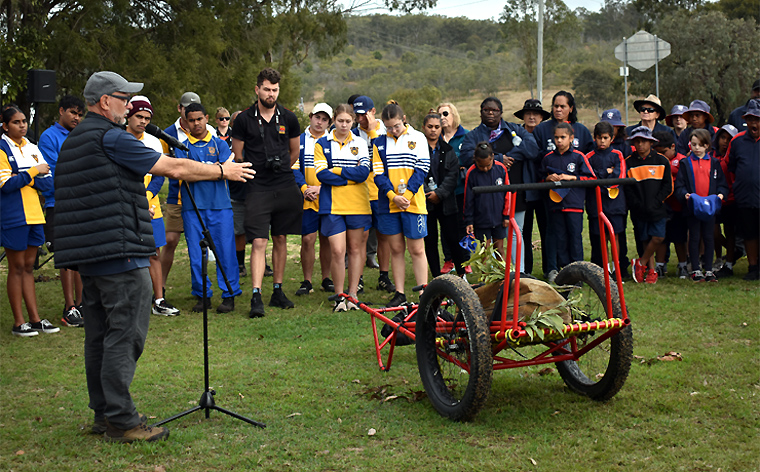 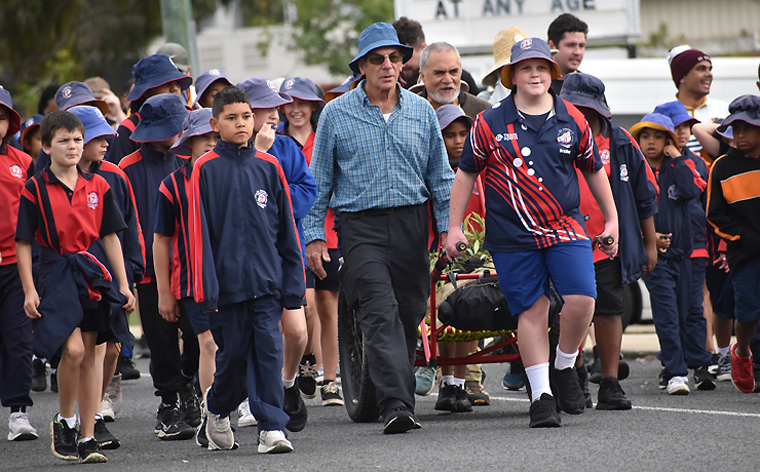 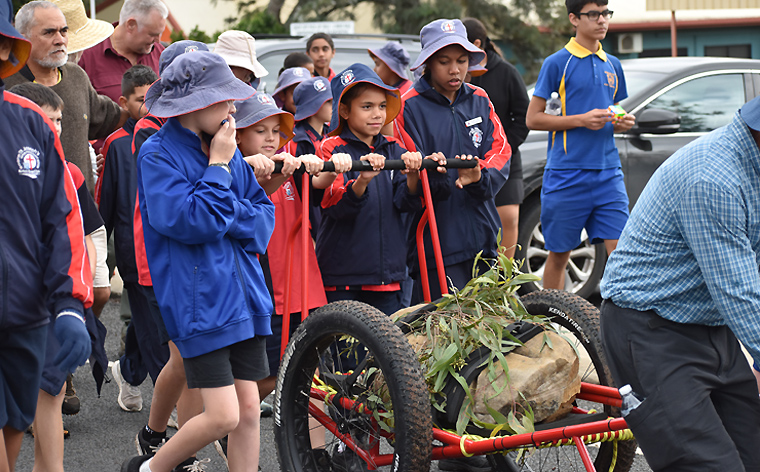 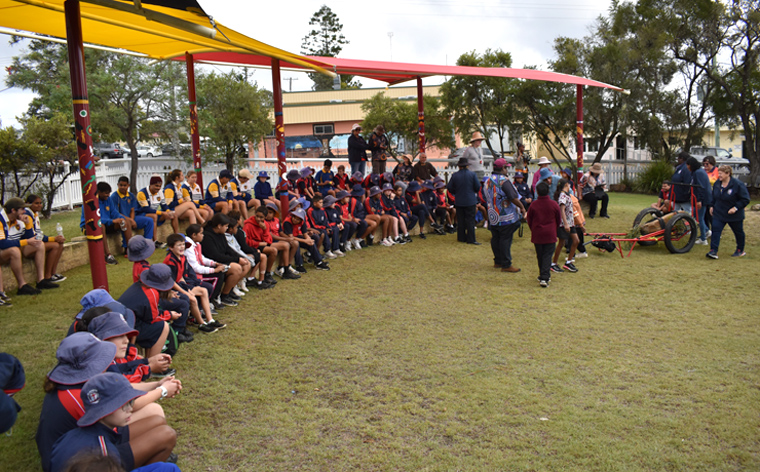 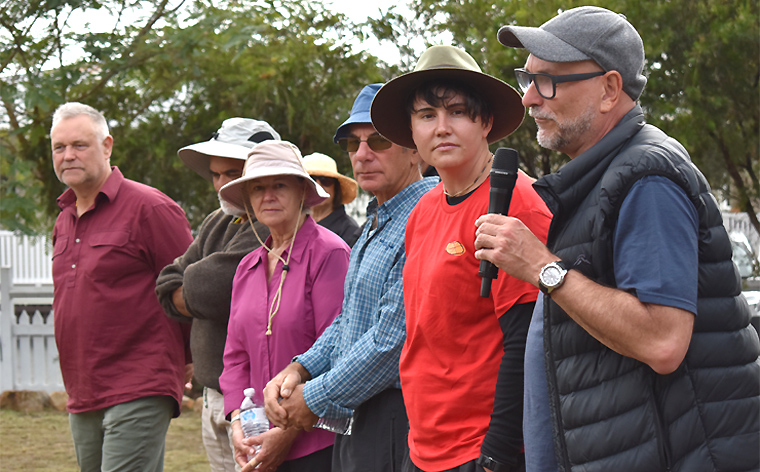 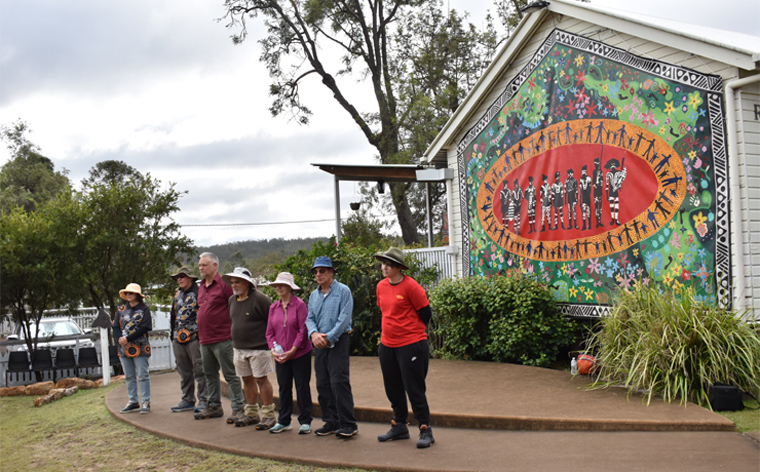 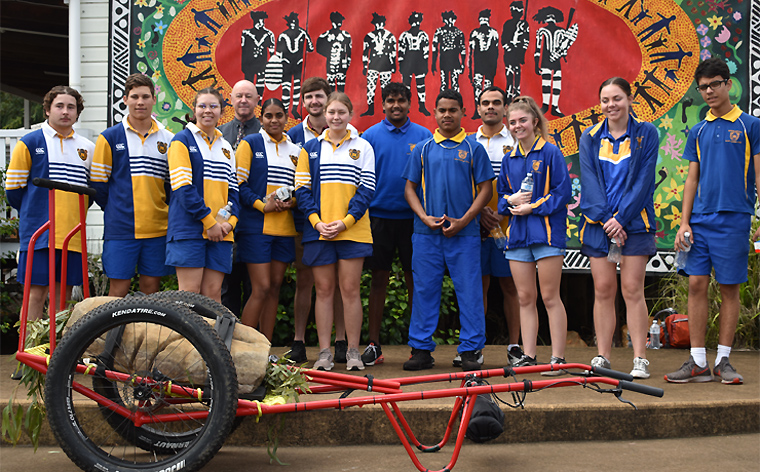 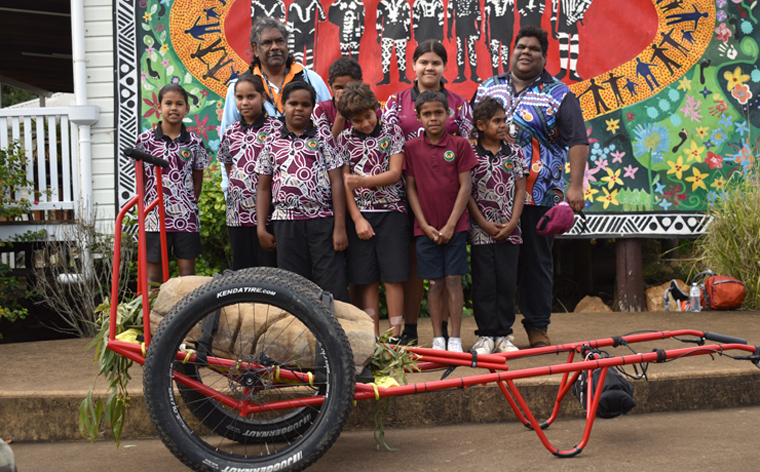 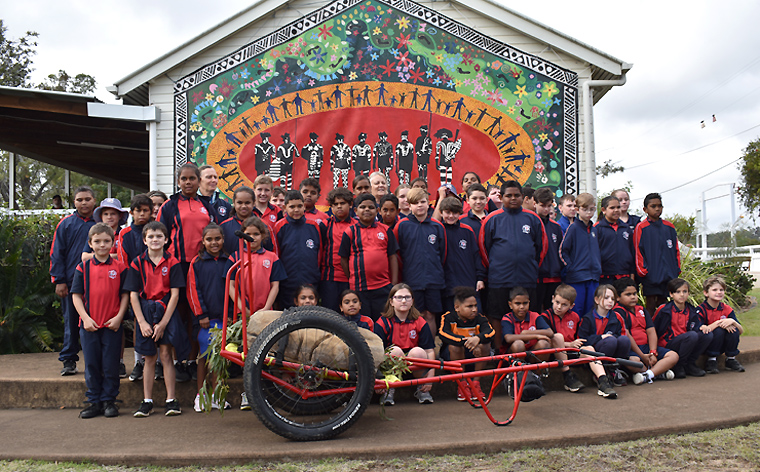 At The Ration Shed Museum, Aunty Lesley took time out to reflect on her time at Taroom …

‘Riverview’ station wasn’t her first destination as a domestic servant (the only role that girls growing up in Cherbourg at the time were trained for).

She was initially sent to a property in the Condamine area but she was very unhappy and only lasted there nine months.

When she was allowed to come back to Cherbourg for the annual show, she told the Department staff she didn’t want to go back to Condamine, so a new work agreement was drawn up.

The girls had no say in these agreements, drafted between the government department and the property owners, but they usually lasted 12 months.

“I came down here (to what is now The Ration Shed office) and stood at the window,” she said.

“The white official in the office said we’re sending you out to another property at Taroom, and you’ll be going out with another girl.

“I thought this will be good, I won’t be so lonely.”

But it was terrible.

“I slept outside in a shed. Cooking, cleaning, looking after kids,” she said.

“At one stage, this other young girl and I ended up cooking for the shearers. We cooked for about eight men. Getting up at 4:00am, cooking breakfast. I was 18, a very young 18.”

Aunty Lesley hated sleeping in that wooden shed. To lock the door for protection she would push a bag of sugar against it as there were no locks.

Her fears were proven justified when she had a “visitor” in the middle of one night, a fencing contractor who had been in town at the pub.

“Late that night when he came back, he decided to pay me a visit,” she said.

“Next thing I knew, the bag was dragging and the door was being pushed open. So I jumped up out of the bed and fought him off.

“And screamed. Lucky that he’d had a few beers and was a bit unsteady on his feet and I got to push and shove him and took off.”

Aunty Lesley ran to the main house where she told the property owners she wanted to sleep in the master bedroom for the rest of the night. They put a mattress on the floor, and she did.

“I was terrified that he might come back visiting,” she said.

“It happened to a lot of young girls. And it happened to our parents and grandparents, sexual abuse and physical abuse.”

The fencing contractor was given his “marching orders” but there were no other ramifications for him.

Aunty Lesley’s assignment at Taroom lasted for 15 months, not 12, as she still owed the Department three months from the Condamine job.

At the end of that 15 months, she had no idea how much wages she had earned because the Department only gave the girls “pocket money”, with the rest supposedly held in trust.

This experience prompted Aunty Lesley’s successful campaign years later for reparations to Indigenous workers which came to fruition in 2002. Her push was then followed by a successful class action.

Aunty Lesley’s next “placement”, this time in Brisbane, worked out much better than either Condamine or Taroom.

“I went to this lovely lady in Clayfield and ended up staying six years until I got married, and the scheme was phasing out then,” Aunty Lesley said.

“We became good friends. She treated me like a friend, not the maid. She’d put her gloves on and we’d do the scrubbing and polishing together. Then we’d spend the rest of the day, with all our jobs done, playing Scrabble or Chinese checkers!

“She just recently passed away last August but I’m still in contact with her three children.”

Aunty Lesley’s experiences have been documented in her award-winning book, “Not Just Black And White”

Aunty Lesley’s thoughts over the years have returned at times to her experiences at Taroom, especially when she learned there were graves from the old Taroom Aboriginal Settlement on the property she had worked on.

When this settlement was broken up, people were walked to Woorabinda and many ended up in Cherbourg, which is why Aunty Lesley was determined the “Star” should visit.

She said this year’s National Reconciliation Week theme, “More Than A Word. Reconciliation Takes Action” was exactly what the Star Of Taroom walk was all about.

“We’re making a start and people like these are spreading the word,” she said.

“It is a very inspiring story.”

After Cherbourg, the trekkers were planning to head to Jack Coe’s Park at Boondooma on Friday morning to attend a smoking ceremony to launch the next leg of their journey on foot back to Taroom, via Allies Creek Forest.

The stone will form the centrepiece of a new keeping place at Taroom which will be opened on July 24.

Johnny said the Star can’t be returned to its original property because that land is now covered with gas wells.