Do You Recognise Him? 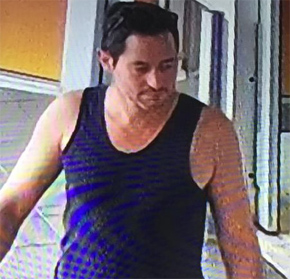 Kingaroy Police want to speak to this man
(Photo: QPS)

Kingaroy police have released a security camera image of a man they wish to speak to in relation to the theft of a backpack at Kingaroy Shoppingworld last week.

The man, described as Caucasian with dark hair, was a wearing a dark blue singlet.

Between 2:00pm and 4:00pm last Thursday, a backpack containing a wallet and cash was stolen from from an open shed at the shopping centre.

A 26-year-old Ellesmere man has been charged with theft, fraud and the possession of drug utensils after police received a report on Saturday afternoon from a Kingaroy resident that they had dropped an envelope containing cash while shopping.

Police investigations led to the search of a home in Hilltop Drive where they allegedly found the envelope that had contained the cash. It will be further alleged that drug utensils and a new large screen TV were also located.

The man will appear in Kingaroy Magistrates Court on July 27.

Kingaroy Police would like to acknowledge the good behaviour of the majority of residents and businesses during the recent easing of restrictions.

“Although some restrictions are being eased, this is not a time to be complacent,” Officer-in-charge Senior Sergeant Dave Tierney said.

“While it has been good to see this positive response, police remind all that it is everyone’s responsibility to understand and listen to the Queensland public health directions and follow them closely.

“Police will continue to patrol public spaces and residential areas to ensure there are no large gatherings and people are following the social-distancing rules.”

Kingaroy police responded to a variety of incidents between May 11-18 including drug, property, good order, offences against the person and traffic-related offences. They also attended 11 calls related to domestic violence and issued 31 infringement notices for life-endangering traffic offences.