The Slow Return To Normal

Queensland will implement Stage 1 of Prime Minister Scott Morrison’s three-step “roadmap” out of COVID-19 isolation from Saturday, May 16.

The PM announced his three-step plan (see below) at a media conference in Canberra on Friday afternoon, but said he would be leaving it up the States and Territories to decide when to start implementing the process as conditions varied across Australia.

Premier Annastacia Palaszczuk said Queensland would implement its Stage 1 from 11:59pm on May 15.

She said it would be a slow return to normality in the post-COVID world but the Queensland plan would provide some certainty.

The Premier emphasised workplaces must have COVID-safe plans in place.

From May 16 in Queensland:

Some different rules will be in place in outback Queensland, where no confirmed COVID-19 cases have been reported.

Dining-in for 20 people at a time will be allowed in restaurants, clubs and cafes; and recreational activities will be allowed up to 500km, but people must remain within the outback area.

Premier Palaszczuk said Stages 2 and 3 would be gradually increase travel distances and the number of open businesses.

Premier Palaszczuk said drive tourism, up to 250km, was expected to resume in Stage 2 in time for the June school holidays.

“All things going well, from June school holidays, Queenslanders will be able to drive and stay at accommodation for the first time since the pandemic hit,” the Premier said.

Plans – including border restrictions – would be reviewed at the end of each month, based on rates of transmission and health advice.

Travel right across Queensland could be opened up in July, if COVID rates of transmission remained good.

Border restrictions would be removed when health advice confirmed it was safe.

Prime Minister Scott Morrison said the Three-Step Plan, developed by the National Cabinet, was “careful to preserve the gains” but Australians could not be “too timid”.

He admitted there would be outbreaks, and not everything would go to plan, but he said we cannot allow our fear of going backwards to stop us from going forwards.

Steps 2 and Steps 3 would be defined in greater detail as the country moves through Step 1.

He said Australia had to “hold its nerve” and “get out from under the doona”.

But he warned he could not see international travel resuming for the foreseeable future. 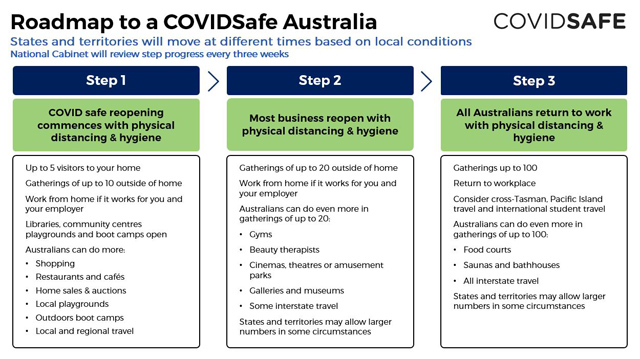 There were no new confirmed cases of COVID-19 reported in Queensland overnight and five more patients have recovered.

More than 4300 tests were undertaken in Queensland during the past 24 hours, taking the State total since the pandemic began to 129,195.

* Queensland Health notes that changes may occur in the number of notifications reported from day-to-day. This is due to updates as new information becomes available or where discrepancies are detected through data quality assurance activities.

One Response to "The Slow Return To Normal"