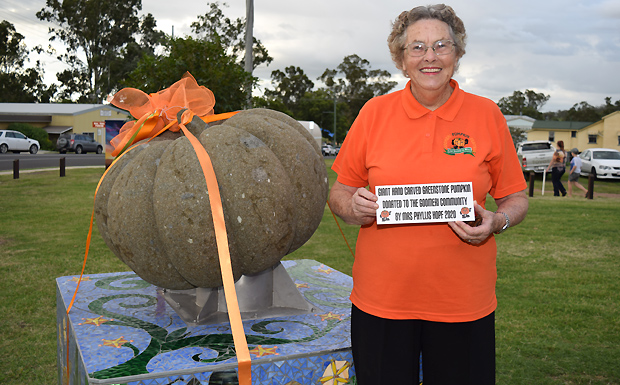 Tourists who drive through Goomeri now have a new option for a selfie .. with a difference!

The unveiling was carried out in conjunction with the Goomeri Pumpkin Festival’s quarterly Twilight Markets.

The 500kg statue is hand-crafted from Indonesian green stone, and has been carefully mounted on a raised concrete block.

The block’s surfaces are covered with mosaics by Sunshine Coast artist Heather May, from Amayz Mosaics.

Mayor Curran said the statue owed its existence to Goomeri resident Phyllis Hopf, and asked her to explain how it all came about.

Phyllis said the statue was originally found in Indonesia by a trader, who shipped it to a Brisbane warehouse and then looked around for a buyer.

About 18 months ago, the trader offered it to the Goomeri Pumpkin Festival committee.

However, when his asking price turned out to be more than the Festival committee could afford, Phyllis bought it herself and donated it to the town.

Phyllis, who farmed at nearby Cinnabar for many years before moving to Goomeri, said she didn’t want to say how much she paid but it was unimportant as it was a gift she wanted to give to the town.

Having acquired the sculpture, the next challenge was where to put it.

“We originally thought of mounting it further along the street, but TMR rejected that idea,” Phyllis said.

“However Council stepped forward and offered us a spot in Market Square, so things got under way soon after that.”

Phyllis said local volunteers had chipped into build the concrete plinth; a Goomeri engineering company donated the mount that holds the statue in place and other people helped with moving the statue on to the plinth.

Heather May handcrafted the five mosaic panels over 10 weeks.

“All five of these mosaics are different, but they all have pumpkins and I think they’re beautiful,” Phyllis said.

Phyllis told the audience that Gympie Regional Council planned to put a concrete path around the statue and possibly landscape the with some small garden beds.

But for now – and certainly at this year’s Pumpkin Festival – visitors can take unique selfies of themselves with Goomeri’s best-known icon.

Mayor Curran praised Phyllis’ community spirit, and congratulated everyone else who had helped.

This included the Goomeri Pumpkin Festival Committee which paid for the mosaics.

“I’m sure this statue will become a Goomeri icon in the years to come,” Mayor Curran said.

“Good on you for doing it. It’s an amazing piece.” 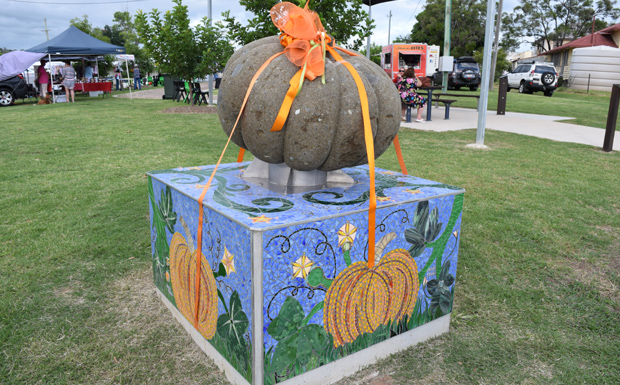 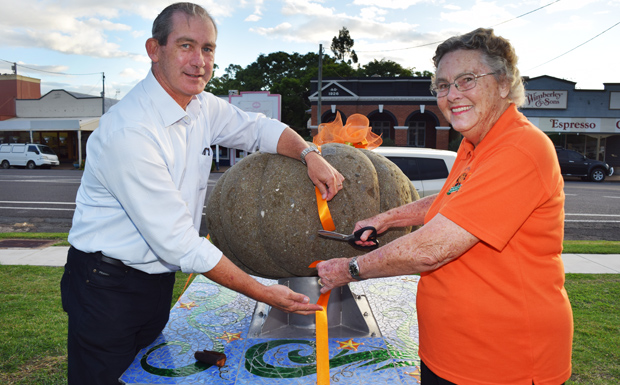 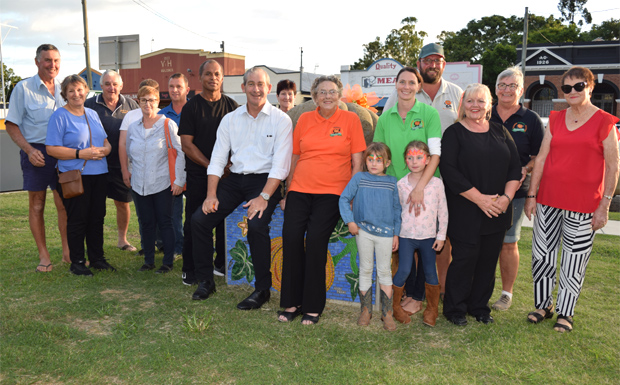 After the official ribbon-cutting, Goomeri residents involved in the project gathered with Mayor Curran and Phyllis Hopf for a group photo