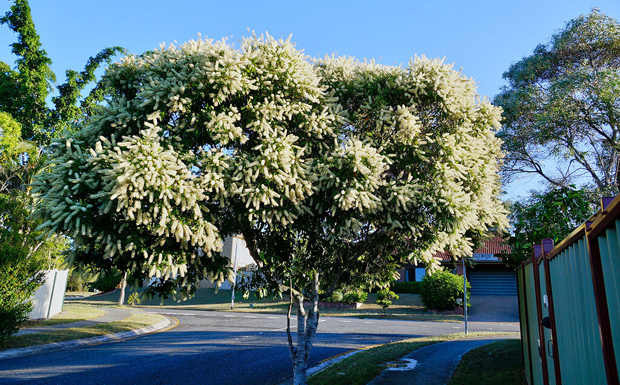 Ivory Curl trees will line the southern entrance to Kingaroy near the Rogers Drive roundabout if TMR approves changes suggested by the SBRC (Photo: Tatters)

South Burnett Regional Council will ask the Department of Transport and Main Roads (TMR) for permission to substitute different plants on the Rogers Drive roundabout in Kingaroy.

TMR contracted the Council to build the $1.8 million roundabout in 2018.

As part of the project, the Department also approved several plant species to landscape the roundabout and its approaches.

Since construction was completed, however, Council officers had found the plant species originally approved for the roundabout were not available in Queensland.

They also said the species approved for the approaches were unsuitable for local climatic conditions.

TMR will be asked to approve eremophila, dietes, helichrysum and tulbaghia and a single crape myrtle for the roundabout, and Little Kurrajong (Brachychiton bidwillii) and Ivory Curl (Buckinghamia celsissima) trees for the approaches.

Murgon Sportsground may get new lighting soon if an application to the State Government’s Active Community Infrastructure Program by the Murgon and District Cricket Club is successful.

At last Wednesday’s SBRC meeting, the club asked Council’s permission to seek funding for the installation of four 28m light poles and LED floodlights in the sportsgrounds.

The upgrade would provide a Class II level of lighting for cricket and other sports – such as rugby league and soccer – that use the facility.

Officers noted the sportsgrounds’ existing switchboard would also require an upgrade as a part of the project.

Councillors were told the ground’s existing lighting system had been struck by lightning last October, which left it inoperable.

Councillors agreed to the club’s request, subject to three conditions:

Council will use a $1 million grant from the Federal Government’s Drought Communities Program to attend to a variety of “odd jobs” in the region.

The money – if approved – will be the second $1 million Drought Communities Program grant the Federal Government has given the region since 2018 after the South Burnett was drought declared.

Under the terms of the grant, funds must be spent on projects that:

As well, all projects must be completed by the end of 2020.

At its January meeting, Councillors resolved to allocate the funds in the following ways:

Council will now submit its list of proposed projects to the Federal Government for approval.