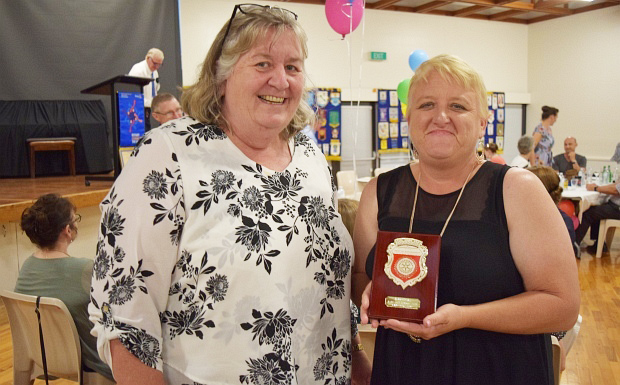 Debbie Jackson, from TAFE QUeensland, nominated Tamara Geritz for a 2019 Pride Of Workmanship Award … Debbie said Tam was an invaluable member of the Kingaroy campus team

Kingaroy Rotary Club breathed new life into its “Pride Of Workmanship” awards on Saturday night, and was rewarded with more nominations than it could accommodate.

The awards were first introduced into Australia by Rotary’s Pennant Hills branch in 1975 to help encourage more Australians to take pride in their vocations.

They were created because Rotary members believed ‘Pride of Workmanship’ – the sense of responsibility to do a job well – was one of the greatest intangible assets in any community, and something that should be encouraged.

The awards motto – “Do It Once, Do It Well, Build a Better Australia” – resonated with employers almost immediately.

Since then, Pride Of Workmanship awards have been given out by more than 600 Rotary Clubs around Australia, New Zealand, the Pacific and Asia.

Kingaroy Rotary last announced awards in 2013-14, but then they lapsed due to a shortage of manpower in the club.

However, they were revived this year when new member, South Burnett Regional Council CEO Mark Pitt put up his hand to act as the branch’s Service Project Director.

“I had to apologise that I couldn’t take up the role of Secretary or Treasurer because my day job keeps me too busy,” Mark said.

“But this was a really great project I was happy to undertake.”

Mark put out a call for nominations from local employers in September and was floored by the response.

“I thought we might get three or four nominations, which would’ve been great,” he said.

“Instead, we got 10 really outstanding nominees, along with another four that missed the deadline but who I hope will nominate again next year.”

On Saturday night, about 60 local business people, nominees and Kingaroy Rotarians gathered together for a formal awards dinner at the SBCare hall.

After a dinner prepared by the Pioneer Lodge Motel’s catering team, employers were invited on to the stage to explain why they had nominated particular employees.

The employees then were presented with special plaques prepared for the occasion.

The audience heard uplifting stories from a wide range of local employers about staff who had grown to become the “right hand” of a business; staff who had upgraded their skills to become indispensable parts of individual business teams; and others who had overcome severe adversities to become inspiring role models for their workmates.

The awards were presented by Kingaroy Rotary Club president David Black, who said he was proud the club could bring the Pride Of Workmanship awards back.

Afterwards, Rotary members told southburnett.com.au the big response the club received to the awards showed there was a genuine need for them. 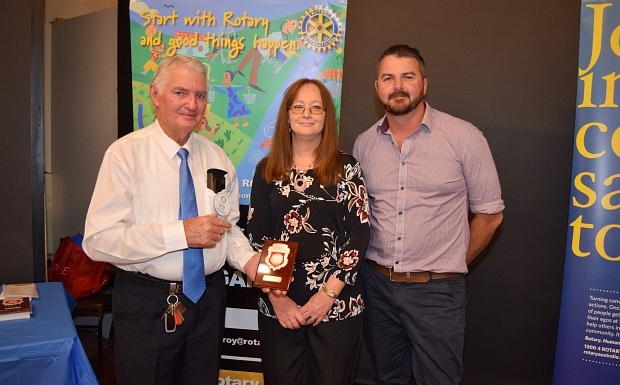 Kingaroy Rotary president David Black presented Tracey Rogerson, from Fiedler Brothers Plumbing, with a Pride Of Workmanship award … boss Todd Fiedler said Tracey had “come with the business” when his family bought it seven years ago but he was very glad she had 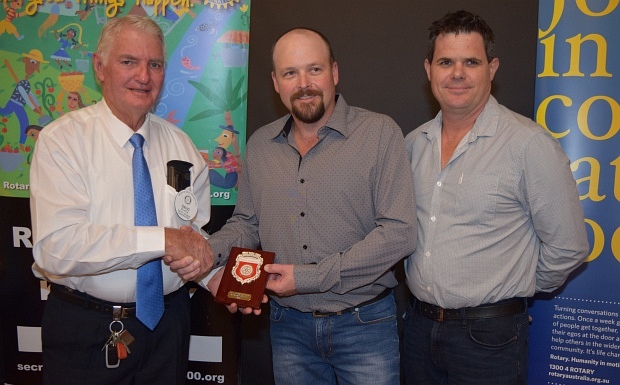 Phillip Prendergast, from Kingaroy Joinery, with boss Darrin Kefford … Darrin told the audience Phillip’s expertise was one of the key reasons he and his wife Amanda could get to take an occasional holiday from the business 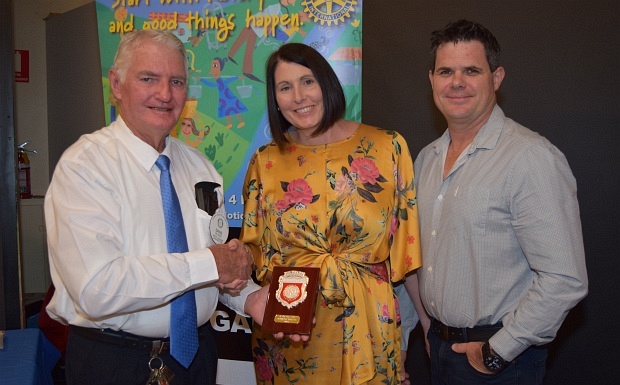 Amanda and Darrin Kefford also accepted a second Pride Of Workmanship Award on behalf of their employee Alyce Collins, who was unable to attend the awards dinner 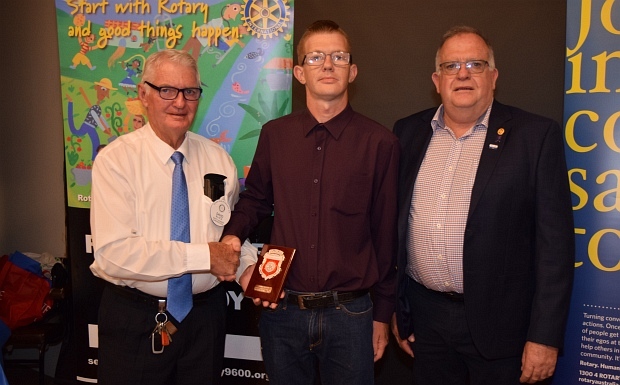 Damian Blunt, from Paynes Carpet Care and Cleaning Service, was nominated by his boss Neil Black, who praised Damian for becoming an intrinsic part of the Paynes’ team 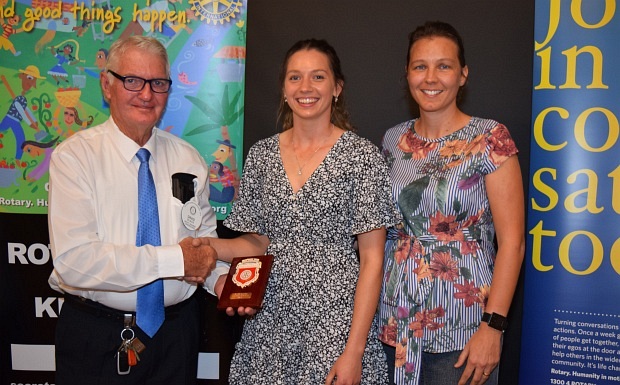 Chloe Davison, from Hansen’s Kitchens, accepted her award after being nominated by boss Michelle Hansen who said she realised Chloe was special the day she applied for a job with the company and was delighted to find her initial impression had proven to be correct 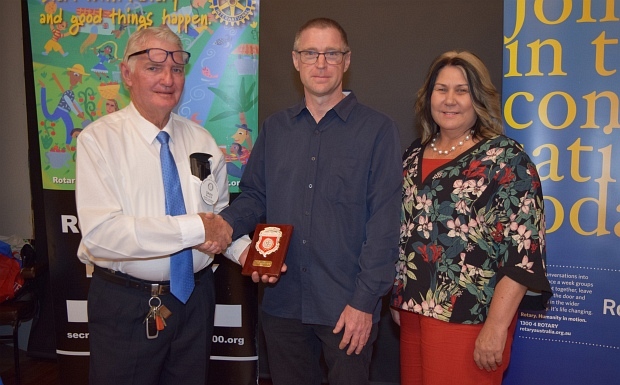 Ian Lacey, from South Burnett Care, was nominated by boss Cheryl Dalton who said Ian was a key part of the group’s NDIS program who made everyone feel accepted and at ease 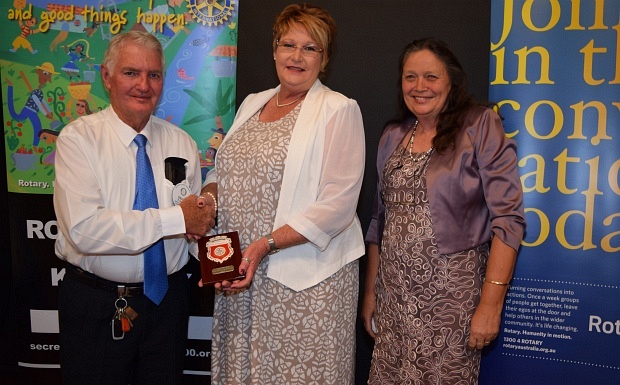 Kingaroy Country Motel’s manager Julie Thomson was nominated by motel owner Kaye Rosslane, who said Julie’s dedication to the business over the past 12 years was “absolutely amazing” 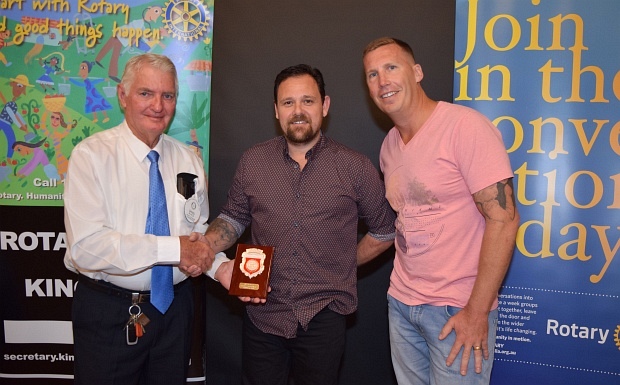 Jay Hilsley, from Astill’s Electrical Services, was nominated by boss Mick Astill who described Jay as a role model for all the firm’s employees 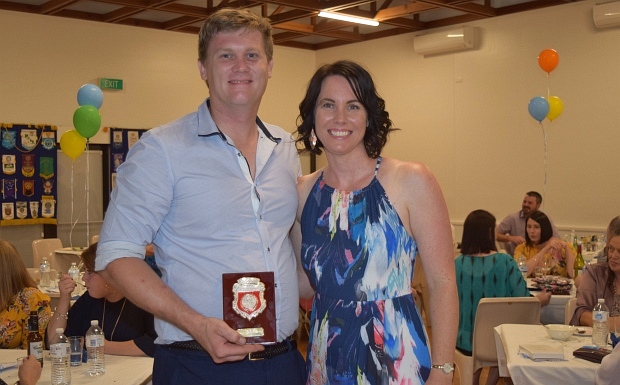 Tim Lavender with boss Jacqui Trace, from Bill Hull Car Centre … Jacqui said Tim’s nomination was a “group award” because everyone in the car dealership had a vote on who to nominate 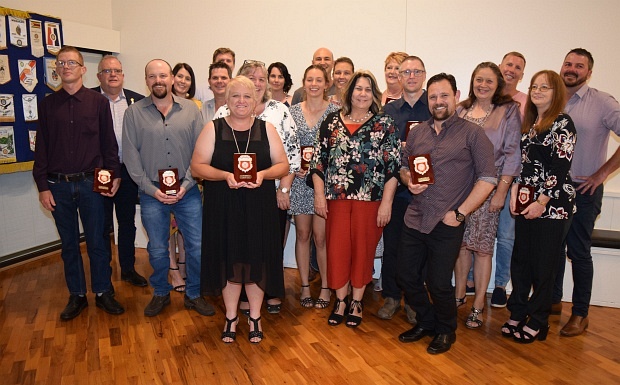 After the individual presentations, all the nominees and their employers squeezed together for a group photo 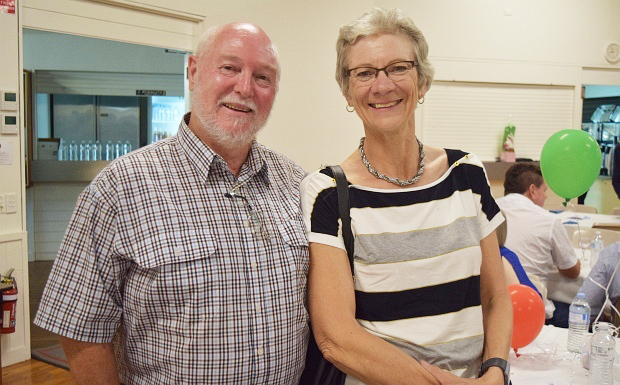