Owner Jye Banks, from Oakey, hoists the Kumbia Cup after Hidden Budget took out this year’s feature race … Hidden Budget is trained by his father, Graham

Hats off to the Kumbia Races … literally! Despite the incredibly windy conditions, the annual Kumbia Cup race went off with only a few hitches on Tuesday.

Wind gusts up to 72km/h were measured officially in Kingaroy which meant the fascinators were flying at Kumbia.

The betting ring and bar proved popular spots to congregate out of the wind and despite all this, the large crowd seemed to be enjoying itself.

The Fashions of the Field competition was moved into the luncheon shed as the catwalk was deemed too dangerous in the conditions but no one seemed to mind.

The entrants paraded around the tables, soaking up applause from the audience.

The Kumbia Races were part of the special “Pinking Up The South Burnett” event which is sweeping across the region at the moment to raise funds for the McGrath Foundation.

The fashion theme was “A Dash Of Pink” which meant there were plenty of pink ties, pink hats, pink shoes and pink clutch bags.

A big crowd gathered around the TV screens to watch the Melbourne Cup televised live from Flemington.

There were plenty of cheers when the winner was declared with many punters backing the “local” favourite (see below).

On the Kumbia track, there were only a few hiccups.

Race 1 was delayed because of a problem with the weigh-in scales and late scratchings were declared in three races – including five in the Kumbia Cup – due to a shortage of jockeys.

Drought conditions led to a firm track although a generous donation by AGL Energy earlier in the week to water the grounds helped keep the dust down.

Seasoned racegoers commented how well-behaved the horses were despite the strong winds.

The racing was fast – the tailwind down the straight probably helped – with the closest finish in Race 1.

The main race of the day was Race 5, the Huston Motors Kumbia Cup.

Winner Hidden Budget is now eligible to compete in the Country Cups Challenge at Doomben on November 30 against the winners of other Country Cup meetings.

The Kumbia Cup was the second last leg of the 16-race competition, with the final leg to be completed at Roma.

Punters and fashionistas take note: Next year’s “Flemington In The Bush” race day will be extra special as the club will be celebrating 50 years of Melbourne Cup Day racing at Kumbia.

Kumbia Cup winner Hidden Budget, with a beaming Sally Sweeney on board, comes back to the mounting yard

Melbourne Cup winner Vow and Declare made a few dollars for punters at Kumbia who backed the gelding with the bookies because of its (almost) local connections.

That’s about as close to a Melbourne Cup winner that the South Burnett has enjoyed! 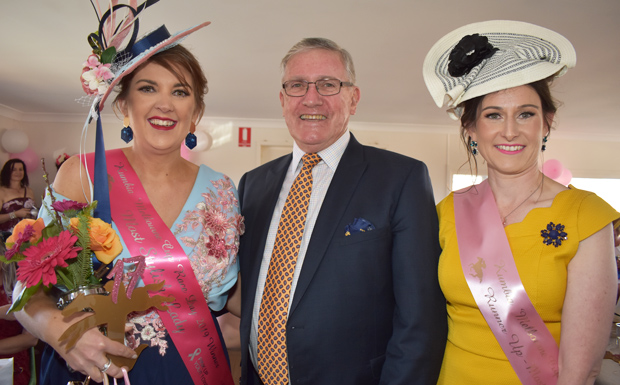 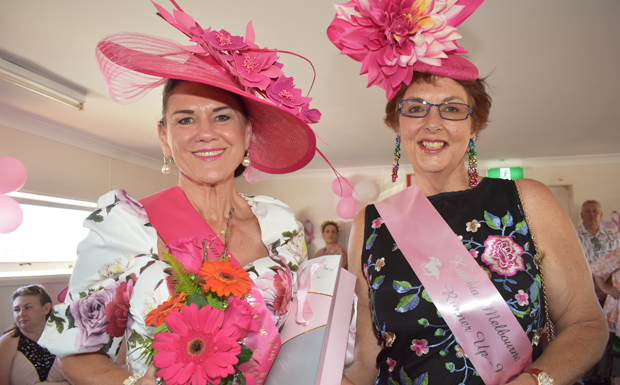 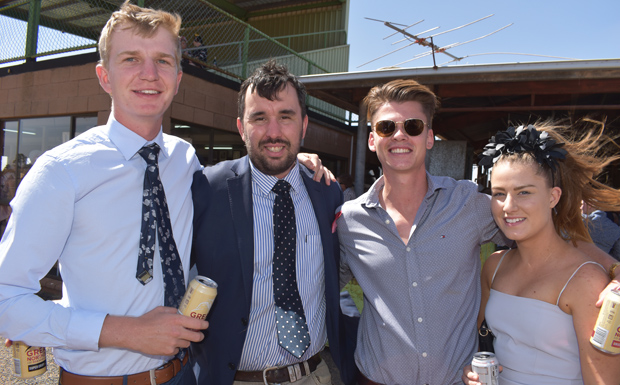 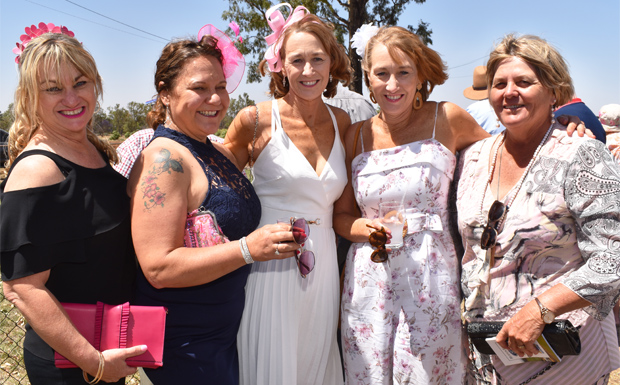 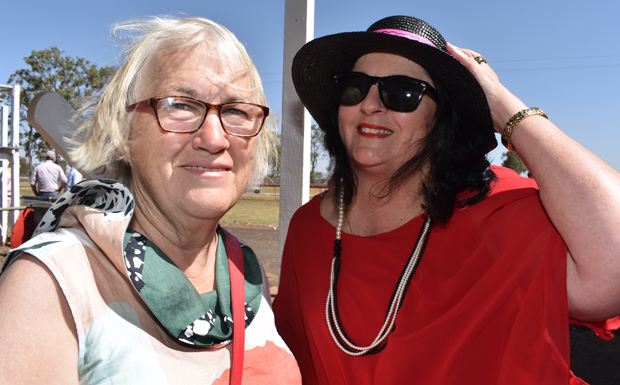 Bernadette Upton and Michelle Rutley, from Kingaroy, were celebrating after the Melbourne Cup … they both backed the winner! 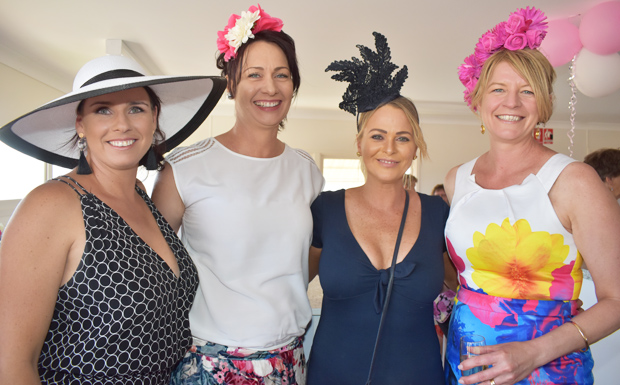 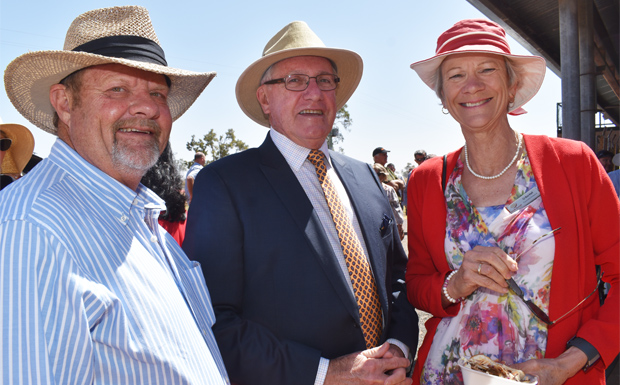 Dr Anthony Crombie, from Brisbane, played the Call To Post ahead of each race … Dr Crombie came up with 47 other people on a bus organised by former Inverlaw resident Russell Reed 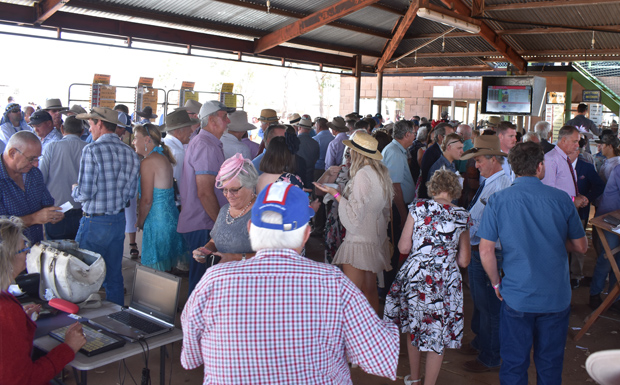 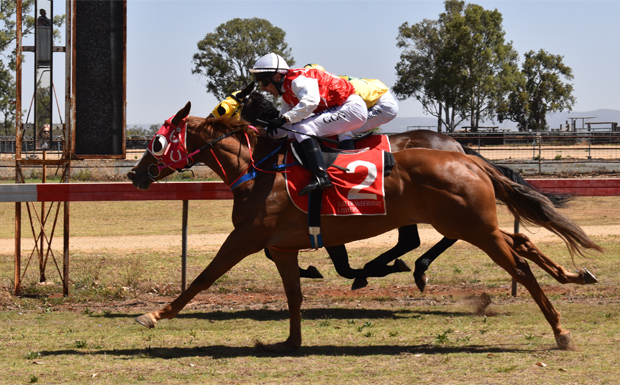 Run The Cutter, on the outside, hits the line just ahead of Forgotten Feeling in Race 1, the closest finish of the day 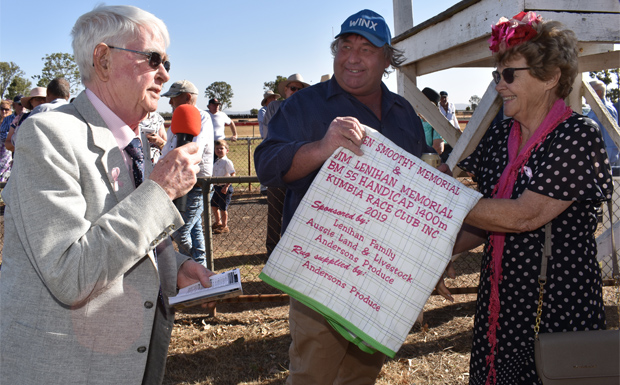 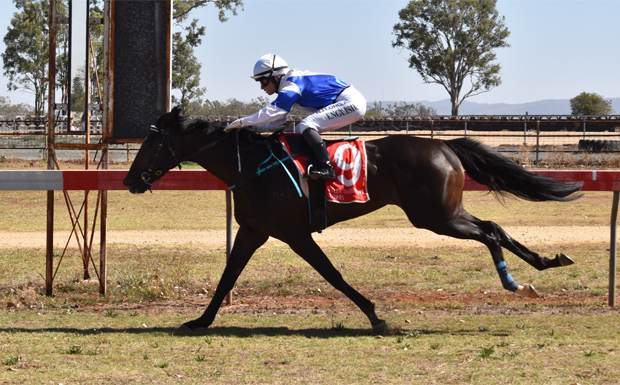 Race 2 winner Bel Strider, ridden by Hannah English, led the way home in Race 2 … English rode two winners and also dead-heated for first place in the fun women’s foot race at the end of the day