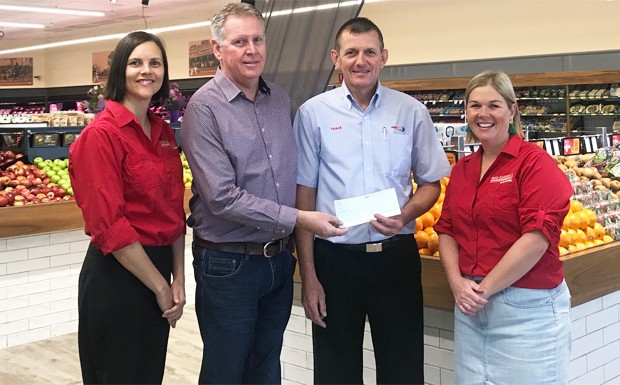 Red Earth Community Foundation South Burnett was surprised recently when a phone call came from Supa IGA Kingaroy manager Trace O’Neill that he had some money to donate to the not-for-profit community group.

Trace said the Foundation had been chosen as the recipient of funds raised through people shopping locally.

“Having seen the different ways Red Earth Community Foundation was helping the region at the 2019 Mayor’s Charity Ball, I think it is important to continue to support our community and people affected by drought,” Trace said.

Trace, who comes from a farming background, said he believed it was important to give back, ensuring local communities stay strong through challenges.

“Kingaroy Supa IGA is part of the generous heart the South Burnett displays time and time again. We are very grateful for Kingaroy Supa IGA’s help in helping in such a practical way,” Red Earth chair Georgie Somerset said.

Board member John Carey has recently returned from the National Community Foundation Forum in South Australia where he spoke on a panel around the theme “Better Together”.

John said that this thoughtful donation was an example of the many different ways a generous community was helping to build an even better South Burnett.

Applications for the 2020 Red Earth Community Leadership Program are about to close.

Red Earth Board members have invited the community to join them for breakfast in Kingaroy on Wednesday, December 18, to hear Red Earth’s annual update and the announcement of the 2020 participants for the leadership program.