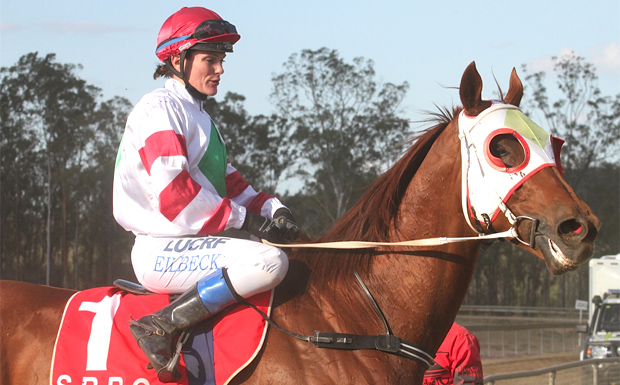 Toowoomba trainer Jason Judge, having collected the 2014 Wondai Cup with Aashiq, has a chance to repeat the dose with Palace Tycoon in the race’s 2019 renewal on Saturday.

There are some odd similarities about the pair of well bred chestnuts.

They both kicked off their careers with elite Victorian mentors who started them in classy Group contests.

During Aashiq’s tenure with David Hayes, the General Nediym gelding was narrowly beaten in the 2010 VRC Maribyrnong Plate (Group 3).

The son of the Gulch (USA) mare Crevice (USA) went on to win at Sandown and score twice at Mornington.

Aashiq’s debut for the Judge team produced a victory in the rich Diggers’ Cup on the dirt at Surat in September 2014.

Palace Tycoon sported the stable’s white, green and red livery for the first and only time at nearby Tara a fortnight ago.

He was slowly away in the Cup and wound up a distant fifth.

The seven-year-old has had plenty of experience on non-turf surface at the likes of Birdsville Charleville, Roma and Cunnamulla.

The first mentor to put the polish on Palace Tycoon was Peter Moody.

After winning over 2000 and 2200 metres at Stawell and Seymour, the Testa Rossa gelding from the Palace Music mare Palace Glow beat six home, at 50/1, in the 2015 Victoria Derby.

There will be a tremendous following for Clouds in the Cup.

The defending champion, with Hannah English again the pilot, only had 55 kilograms to contend with a year ago when his official rating was 68.

Some eleven assignments since have harvested three wins and five placing.

The grey and Palace Moon both now hold a 74 rating, and were allotted 60 kilograms for the feature 1465 metre event this weekend.

The bay sired by Dane Supreme was smart enough to take out a Doomben Class 5 (1600m) in November 2017 and six provincial races on the grass.

The Oakey performer has been placed on the non-turf surfaces at Roma and Gympie, has won on rain-affected tracks and was not disgraced at Birdsville last year.

That comes as no surprise as Kalangadoo is a spot on the map about 30 kilometres north of that famous South Australian town.

The Shrewd Rhythm gelding’s victories have been posted at Warrnambool, Yeppoon, Gladstone and Gympie and he has prevailed in heavy going.

After a dozen outings for Mick Attard’s Rockhampton outfit, Kalangadoo Chrome’s two tasks for Gladstone conditioner Phillip Pengelly have yielded placings over the mile at Gympie and Caloundra.

This fellow does have prospects, particularly with a former local hoop in Jason Missen in the pigskin.

Of the other contenders, Bit Of Alright meets Clouds poorly at the weights relative to their recent Gympie clash, while On Demand, Fast Arli and Earl of Fordyce have to be taken on trust on the sand.

Elsewhere On The Card …

Clouds’ stablemate Kentford has started in the red at both his Queensland runs at Gympie and Wondai.

The lightly raced four-year-old saluted both times and the bookmakers are most unlikely to be generous when betting gets underway for the Samios Plumbing Supplies Kingaroy Class B (850 metres).

The event honours the former local who booted home four winners on the Wondai program on March 24, 1990.

Vo Rogue’s sometime strapper Debbie Osborne, Jo Downes and Jenny Cochrane each chipped in to give the girls a 7-0 clean sweep.

Four decades ago, in May 1979, the Kiwi jockey Linda Jones chalked up the first success for a female jockey in Australia when she picked up the Labour Day Cup at Doomben on Pay The Purple.

Shortly after, Queensland’s spearhead Pam O’Neill gained her licence and set the critics back against the wall by registering a treble at the Gold Coast on her debut.

Remarkably, she achieved the same feat at the same venue seven days later.

An interesting lead up to the breakthrough for women riders was that New Zealand was embarrassed when the established Canadian jockey Joan Phipps was able to ride there and win.

That triggered a move to give the locals like Jones an equal opportunity.

So when Linda, with experience under her belt, visited Australia and performed impressively, the resistance to the Down Under agitators lost caste.