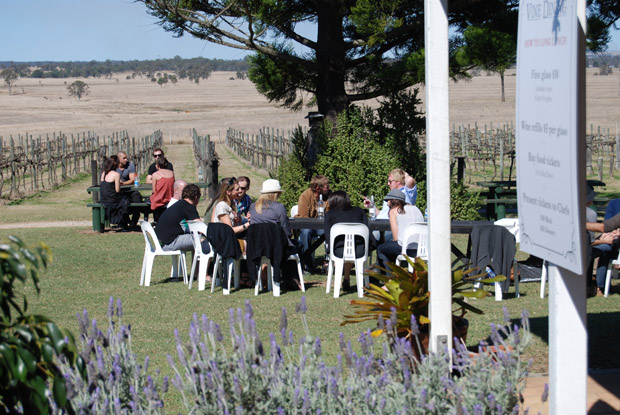 FLASHBACK: Vine Dining focused on relaxed eating, responsible drinking and socialising, and proved popular in the three years it ran … the South Burnett Wine Industry Association wants to revive the concept this October with a few enhancements

Vine Dining, a multi-winery experience that ran at Moffatdale for three years between 2010 and 2012, will be returning this October in a revamped format.

Like Vine Dining, Saturday guests will be able to travel to multiple wineries on a free shuttle bus that will move between all participating venues in a continuous loop.

Each winery will be offering free entertainment, $10 tasting plates and $6 glasses of wine, and guests can choose what wineries they want to visit and what they want to try.

Kingaroy wineries will also be able to join in by setting up “pop up” cellar doors at Moffatdale venues.

On Sunday, wineries can continue the revelries, but guests will need to travel between different venues using their own transport.

The plan to run Grape Escape was agreed to at the most recent SBWIA meeting as a positive way to increase wine-related tourism in the region.

However, it was limited to just three wineries and held in August, which is usually cold and windy and a time when most vineyards were little more than bare sticks on wires.

By moving the event to October, guests could enjoy warmer spring weather and see the region’s vineyards in a more attractive light.

Because of the distance between Moffatdale and Kingaroy, running a shuttle between the two hubs of the local wine industry did not seem feasible.

However, a parallel Kingaroy circuit may be able to be developed in future if plans to create additional cellar doors in the south come to fruition in future years.

Jason said a final list of participating wineries was being prepared and would be announced in the near future.