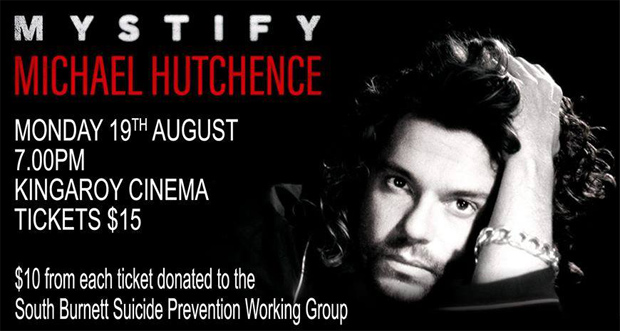 A special charity screening of the Michael Hutchence biopic “Mystify” has been organised at the Kingaroy Cinema to help raise funds for the South Burnett Suicide Prevention Working Group.

Hutchence, the lead singer of rock band INXS, tragically died at age 37 in 1997 at the height of his career, the night before embarking on a world tour.

Critics have praised the documentary:

“It should prove essential viewing for the subject’s fans: a tender portrait of the man’s highs and lows that sheds new light on the broken years.”

“While Mystify in many ways amplifies the tragedy of Hutchence’s death, it also goes a long way toward explaining and humanising it.”

“Insightful and revealing in ways that most rock docos could only dream of.”

The screening, at 7:00pm on August 19, is being organised by the South Burnett Suicide Prevention Working Group in conjunction with South Burnett Arts Inc and the Kingaroy Cinema.

The evening is being sponsored by Stanwell.

As seats are limited, tickets must be pre-booked.

Tickets are available at the South Burnett Times office at 176 Haly Street, Kingaroy, or by contacting Simon Neal on 0408-459-524.