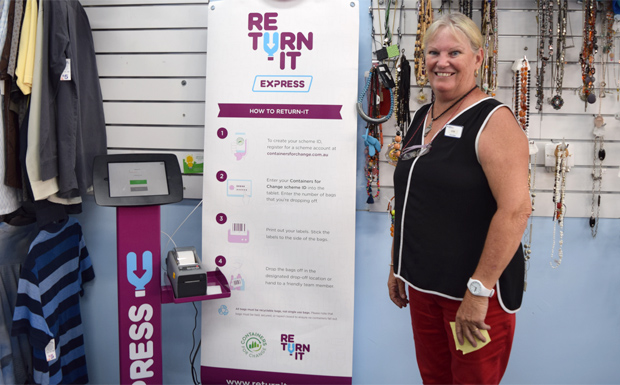 FLASHBACK: Kingaroy Lifeline Shop manager Kym Byrne in 2018 with the Return-It machine which was installed in the Lifeline shop … it was later shifted to the rear of the building

Kingaroy’s Lifeline shop is still listed on the Re.Turn-It website but the charity store is no longer accepting cans and bottles for 10c payments.

The Lifeline shop was an Express agency for Re.turn-It and could only accept bottles and cans in clear plastic bags and issue receipts.

Payments were credited into registered accounts and the store received a small donation from Re.Turn-It for every item processed.

However, as it was the only receival point in the southern part of the South Burnett, the Lifeline retail shop was quickly overwhelmed with bulk drop-offs, stretching resources.

As well as Cherbourg, drop-offs can still be made at the Kilkivan Post Office in Bligh Street from 9:00am to 5:00pm, Monday to Friday.

South Burnett residents also have the option of donating their Containers for Change recyclables.

A number of schools and community groups – including Kingaroy Scouts on Saturday mornings near Crowies Paints – are collecting containers as fundraisers.

The groups take the containers to Cherbourg to receive payment.