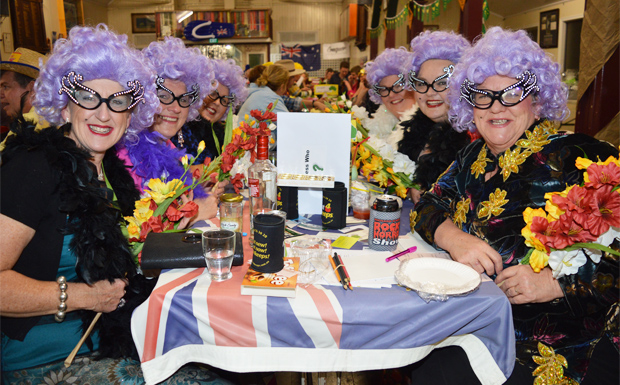 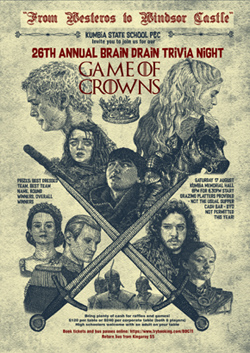 This year’s Kumbia Brain Drain will have a medieval theme

UPDATE: The Kumbia Brain Drain has been rescheduled to Saturday, October 26

With just a month to go, the organisers of the Kumbia Brain Drain are gearing up for another cracking night of trivia, raffles and laughs on Saturday, August 17.

The popular annual event is run by Kumbia State School’s P&C at Kumbia Hall as a fundraiser.

James Curtain, chair of the Brain Drain sub-committee, said the evening was a very important event on the school’s calendar.

“We’ve been able to use funds raised in the past for things like school camps, sporting equipment, additional learning resources and support for kids to attend representative sporting events that they couldn’t otherwise get to,” he said.

“The Brain Drain is our major fundraiser each year, and it has been for a long time.”

James said it was great to celebrate the 25th anniversary last year with a full hall, and he was hoping for the same again this year.

“This year the theme is ‘Game of Crowns’ and we’re anticipating a lot of creative interpretations of that combination of themes – Game of Thrones, royalty and medieval times generally,” James said.

The Brain Drain is a trivia night where teams of six compete for round wins, with an overall winner announced at the end of the night.

There are also prizes for best team name and best dressed team, and the competition is usually fierce.

This year the Brain Drain will be introducing two other small changes.

The first is that high school students will be allowed to take part, providing there’s at least one adult on their table.

And the second is that a cash bar will be operating rather than the traditional BYO arrangement.

The organising committee is also seeking sponsors for the event.

Local businesses traditionally donate prizes or funds for winners of the various raffle rounds held on the night.

“It’s a bit different this year. We’re hoping for a couple of major sponsors rather than a large number of smaller ones,” James said.

“It’s a lot of work for our volunteers to follow up over a hundred sponsors like we have had previously.

“But we can assure any interested businesses lots of publicity!”

Ticket sales are under way and local residents are encouraged to move quickly to book a table.

“The Brain Drain is usually a sell-out event, and we’d hate to see anyone disappointed,” James said.

Tickets for this year’s Brain Drain can be booked online.

Potential sponsors should phone James on 0409-598-179 for more information.