Mustangs Ready For A Big Weekend

Murgon Mustangs are hosting a huge two days of rugby league action this weekend with some of the best young players in country Queensland ready to show off their skills on the paddock.

The combined Under 18 and Under 20 47th Battalion carnival will feature teams from the South Burnett, Bundaberg, Central Highlands, Gladstone, Rockhampton, Roma, Toowoomba and the Queensland Outback.

The games will be played across two fields at Murgon Sportsgrounds.

A QRL spokesperson said the U18 and U20 carnival provided an opportunity for junior players who were not currently playing in Meninga Cup or Colts competitions to play high-level representative rugby league.

At the end of the carnival, Under 18 and Under 20 Central Crows teams will be selected to play South-East Queensland on July 27 at Bishop Park in Nundah.

Games scores will be updated online

Entry fees to the grounds each day are: Adults $4, pensioners $2, students $1 and children under 13 free. 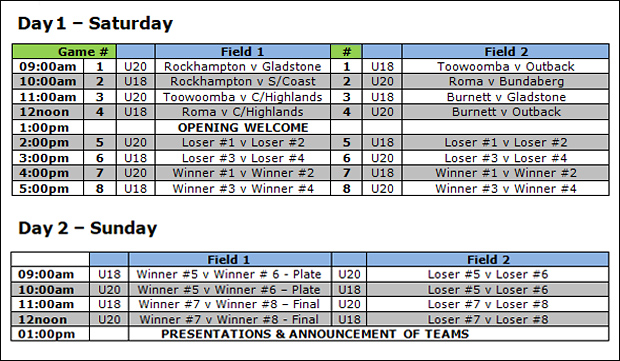 In other rugby league news:

The Central Crows junior teams were selected at the end of the recent Central Division Junior Carnival in Bundaberg.

Several Burnett players were selected to play in the Crows teams for this year’s State Championships which will be held at the Sunshine Coast Stadium from July 4-7.